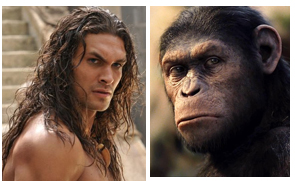 When GateWorld caught up with David Hewlett for an exclusive chat in Chicago last month — while he was a guest of the Creation Entertainment Official Stargate Convention being held there — we congratulated him on the success of his latest appearance on the big screen, in this summer’s Rise of the Planet of the Apes.  The film has proven to be a blockbuster for Twentieth Century Fox, achieving a domestic box office draw of more than $150 million in less than a month — and over $300 milion worldwide.

Comparatively, fellow Atlantis co-star Jason Momoa‘s big-screen opus, Conan The Barbarian, has failed to capture an audience.  The film — with a reported $90 million budget — has just barely cracked $20 million in total domestic receipts, even after three weekends of release with increased prices from 3-D showings.  International receipts double that haul to just over $40 million worldwide.

When we talked with Hewlett, we suggested a few different possible headlines for this news item.  One was “Hewlett’s Apes continue to clobber Conan“.

Regardless of who is king of the box office between the two right now, Hewlett made it clear how proud he was of Momoa as we talked in-depth about both actors’ summer efforts.

“Jason’s so sweet. He had a screening for friends,” Hewlett said.  “Basically, he told Lionsgate they were gonna do a screening for us.  And so he invited about 40 friends and brought cases of beer and put the movie on for us.  And it was just so lovely!  I spent the entire time – I actually sat behind him – so I spent the whole time sort of touching his face and going, “It’s like you’re right there!”

“It’s a really fun movie. Like, it’s really Conan. It’s what it is – you don’t go in expecting Shakespeare,” Hewlett continued.  “But he’s just so …. we always – Joe [Flanigan] and I joked about this, that we always said he’s going be a movie star. He’s just built right for it.   And he’s a great Conan. And he’s just so — the fight stuff’s amazing and the effects are great. It’s not that expensive a Conan. So, you know, while it may not be at the top right now, it’s going to do well.  And in big part to Jason. I mean, just — he’s fantastic. I’m his biggest fan!”

Hewlett also glowingly talked about his experiences working on Apes, and his appreciation of both cast and crew of the film.

“They somehow managed to make a movie that focused on the characters and not on these ridiculous action things,” Hewlett said.  “I mean, in this day in age, you’re used to going to see a movie and going like ‘OK, look, let’s just throw plot to the wind and we’ll just enjoy the visuals.’  It was so nice to see a movie that focused on character interaction and a coherent plot.  Science is always the science. You’ve always got to come up with something, you know? But I just thought the characters were fantastic.  As were the stunt teams and the FX guys at WETA.”

“Rupert really did a fantastic job. I mean, it was really eye-opening to me to see what directing a movie like that is all about. And it’s just this amazing amount of patience and management skill and vision,”  Hewlett said.   “But it’s like running a factory. ‘Cause it’s this huge … you’ve got second unit shooting this and then the action unit shooting that. You know, third unit shooting little pick-ups.”

“I’m like Rupert’s biggest fan now.  Well, probably not now.  Because everyone else is his biggest fan now as well,” Hewlett joked.   “But he started with doing a film called The Escapist.  It was literally a sub-million Pound [budget] movie.  His next movie is Rise of the Planet of the Apes. It’s like, what, a hundred million dollars? So it’s one of the biggest single jumps in Hollywood history. And he so deserves it. I think he just did a fantastic job. And he’s just a really nice guy.”

“It’s like Jason [Momoa] as well,”  Hewlett concluded.  “I love seeing nice guys – ‘nice’ sounds like such a horrible word.  I just like seeing good people do well because it doesn’t always work that way in this industry. Those are just two guys that I’m just very, very glad to see doing well.”

I just watched Conan the Barbarian and it was awesome. The action/acting were great and the story was straight forward and fun, I liked where it went. The critics are way off on this one. It was everything it said it would be and I am will be very happy to buy the blu-ray when it comes out. I really hope that Jason Momoa’s script for the sequel gets greenlit. IMDB’s 5.3 rating is way off. I can’t suggest it enough… obviously.

I just thought of a complaint for the Conan movie. It cost 90 million dollars and I see no reason why it cost even half that. It had a b rate director (Nispel) who did very well and for most people a fairly unknown actor (Momoa) and special effects that were only slightly better than Sanctuary which isn’t saying that they were bad by any means only that they should have been accomplished for much cheaper!

“I’m his biggest fan!” … I think, given the current ratings of Conan, and his performance on Game of Thrones, and that of Atlantis (in other words, basically the same character), perhaps David Hewlett is his *only* fan right now. I like Momoa ok, but he really needs to broaden his skills…

Conan made so far 42 million world wide and hasn’t started in all foreign countries yet. I guess it will make around 50 – 60 million overall. Yes, it is still a flop, but not a 20 million one. @ clarkfk It has nothing to do with his skills, that he gets the same kind of roles. Producers see this big guy with a lot of muscles, which makes him appear perfect for action roles. Roles, where he can show his body. Momoa may be also able to play a convincing banker, journalist, and so on, but only if someone… Read more »

People are far too cynical about these things. It’s been quite a few years since the US box office tally was the most important thing for a film’s box office success. As has been pointed out, the film has yet to open in other territories, and action transcends language/cultural barriers. It’s sure to do well on DVD/Blu-ray as well – so it’s far from a flop. Momoa has a big future ahead of him – although I’d say Hewlett is the former Stargate castmember who is likely to have the most career longevity – but whether it’s as Conan or… Read more »

@Matt I’m sure there will be a sequel at some point.

I mean, they’re making a sequel to fraking Clash of the Titans, which was a terrible movie with horrid special effects and really bad 3D. If they can afford to do a sequel to Clash they can do one to this. I haven’t seen Conan but I’m sure its at least better than Clash of the Titans (seems like it would be fair to place the two in the same category).

A sequel of Clash of the Titans isn’t surprising. It was a financial success. Conan isn’t. So I wouldn’t be so sure, that they make a sequel with Momoa.

whomever has the keys to Stargate Atlantis needs to get with the program, and let the Stargate movies rain down like thunder from the heavens. I got money and I’m dying for a revolution !!! All I ever saw was a few minutes of Picardo and Hewlett chasing that power surge around Atlantis in season five, and then I took, stole,bought cash money,or ran over anyone or thing that got in my way from seeing the rest of the series. I am not A trekkie, i just appreciate good entertainment, which is an understatement for Atlantis. Wrestling sucks and I… Read more »