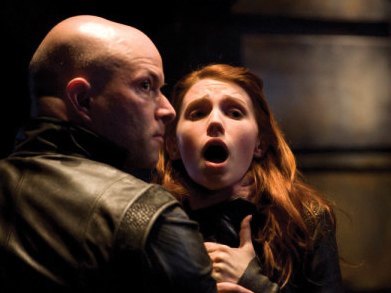 When it wasn’t airing on U.S. cable stations Showtime and Syfy Channel, the Stargate franchise has also been dominating the U.S. syndication market for more than a decade.  This weekend, the final season of the third series enters syndication for the 2011-2012 season.

Syndication includes all those local stations in individual markets that buy the repeat rights for the new season, so you’ll want to check your local listings to find the time and station when these episodes air during the week.  Most stations air syndicated episodes of Stargate on the weekend, often in the late afternoon or very late at night.

SGU Season Two begins airing the week of September 12, meaning you may have already spotted “Intervention” on your TV dial over the weekend.  New-to-syndication episodes continue next week with “Aftermath.”  (We’ve published the exclusive, full-season schedule here.)

But never fear, Atlantis fans — MGM is also giving you another chance to enjoy a “best of” run of SGA episodes in the new syndication year, as part of its “MGM Presents” offering to stations.  Atlantis will run from this coming week (the week starting September 19) through March 18, at which point repeats of The Outer Limits will take over its spot.

We don’t have a list of episodes for the schedule yet, but we’ll update GateWorld’s syndication schedule as soon as it is available.

Meanwhile, Syfy Channel continues to air classic episodes of Stargate SG-1 and Stargate Atlantis on a somewhat irregular schedule, at 5 p.m., 1 a.m. and 2 a.m. (E/P) most nights.  The shows can also be spotted on various specialty cable channels operated by MGM and Showtime.

I had no idea that SGU was in syndication. Any idea what the ratings are like?

Well in australia, we had SGU on cable first, then it wen’t on a free to air network. That was both seasons. Still cancelled though eekkk!!!

Since they are all sleeping for 3 years,maybe they will made something in future,im dont like SGU at all,but canceling show no matter how much he suck isnt rly nice,they did same thing like with SGA

Where is our SGU Season 2 blu-ray ???
Guess you decided to screw us over.

Stargate SG1 has been airing weekly in sequence on MGM’s This( http://www.thistv.com/)Broadcast network in the US for almost 2 years . 2 sequential epsiodes are on every Sunday night 9PM ET. The last 2 of the series Dominion,Unending) aired last Sunday, 9/18/11. This network will encore the whole series(10
seasons, 214 episodes) in sequence again over the next 2 years beginning the next Sunday, 8/25/11, with Children of the Gods Part 1 and Part2.

Stargate rewatch did started after all,and no matter how many time i saw it it cant be boring.In few years from now,SG1 will be classic,and thats rly awesome,in my opinion.

Great, so we can all not watch it a second time.

i just finished watching universe again, i really liked it alot not as good as atlantis though but still really good i really hope they atleast finish it theres many ways, a renewal, a mini series, a movie, as a episode to another future stargate series, im sure at the very least it will get a mention in the future if any of those forms get released. to bide more time or wrap it up. i just wished they had a full 5 season run, hell even star trek looks like starting back up again next year with a new… Read more »

@Jackoneill
Actually SGU was on channel 9 FTA first. It along with supernatural were dropped for ratings issues after 3 eps. It was then Fast-tracked on Scifi Aus. It then came back on the Go channel.