As an editor for a site that covers a franchise as large and complex as Stargate, you really do have to be a fan of all the characters and series — and not just because of all the knowledge and trivial things you need to know (co-editor David Read is by far our undisputed king in that department).  But with respect to Stargate Atlantis and Stargate Universe, I personally get an added thrill whenever we get the chance to touch base with the cast of Stargate SG-1.  There’s just something special about your first Stargate series — and deep down, we’re all still fanboys to a small degree, too.

That’s why this fanboy was extremely happy to learn that GateWorld would get the chance to chat on the record for the first time in several years with the man who brought Teal’c to life for over a decade — Christopher Judge.

We got that chance late this summer when Judge was a guest at Creation Entertainment’s Official Stargate Convention in Chicago.  It was his first Creation convention in half a decade, and it was evident his popularity over the years has diminished none whatsoever.  His hectic appearance schedule limited our time to chat but not the quality of it.  In our brief interview with Christopher Judge, the actor talks frankly about his time on Stargate Continuum, a television landscape without Stargate in it, his memories of fellow cast member Don S. Davis, new hope for his long-gestating project Rage of Angels, and more!

GateWorld:  What?  Does my legend precede me?  [laughs]

How are you, Chris?  It’s been a very long time!

GW:  I’m not going to lie, I’m excited to sit down and talk with you a bit.  The last time I personally saw you was right here in Chicago back in 2005.  It was a couple years before I actually joined GateWorld as an editor.

CJ:  That is kind of far back.

GW:  It is!  And as it stands it’s been close to four years since the last time GateWorld sat you down for a chat.

CJ:  Did I even say anything worthwhile?  [laughs]

GW:  Absolutely!  We had Ark of Truth to discuss!

GW:  So Continuum wasn’t even out yet. Let’s just discuss that, just a little bit.   It was possibly your final appearance as Teal’c. What were some of the memories from that shoot for you?

CJ:  Well, you know the show had ended and it was just great. What I remember most is just the reunion and seeing everyone. Not just the cast, but also the crew. We had gotten back almost our entire crew back. So, it was fifteen or seventeen days — whatever it was — of just a reunion. 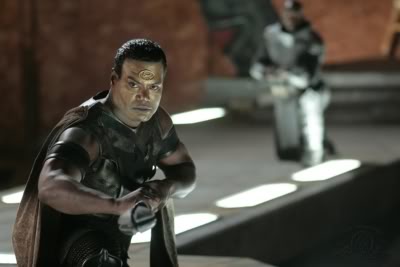 Based on how well the SG-1 movies sold, Judge expresses surprise that a third film never saw the light of day.

Looking back on it, the only time that any of us see each other anymore is now at conventions. Everyone has kind of moved on with our lives, and that speaks to the transitory kind of state of the business. You make these great friends, and then sometimes you don’t see them again for five, 10, 15, 20 years, or whatever it is. It’s really given me a real kind of perspective on what a great time we had for 10 years.

GW:  When it wrapped, was there any type of feeling of “it is over this time?”  I mean, at the time there was talk of possibly a third SG-1 film dependent on how Continuum and Ark of Truth did. Obviously, they did well, but that was also before the DVD market started to really kind of take a hit. At the time though, did you have a feeling like, “Okay, this could be it”?

CJ:  You know, no, because we fully expected to, at least, do one more.  So it’s weird looking back on it.  That if we had known that that was going to be it, I wish I had taken more pictures.

GW:  Continuum also marked Don S. Davis’s last appearance in the franchise as General Hammond and one of his actual final performances before he passed away.

I met Don for the first time in Milwaukee way back in 2002.  He and Teryl [Rothery] did a convention there together, and from the beginning I was struck by how down-to earth he was.  Just devoid of any ego.  But so talented.  And then we met up two more times before he passed.  It was still before I began on the site.  But he was so approachable.  We talked at length about our different goals and dreams.  And his love for life, for art — and for Ruby [his wife] was so evident.

Honestly, as a fan of his work and of him as a person, my conversations and time with him are moments I know I’ll always be thankful for.  But for you, Mike [Shanks], Rick [Dean Anderson] and Amanda [Tapping] — who spent literally years working and laughing alongside him — I can only imagine the sense of loss his passing brought.  If you’re up to answering, we’d love to know some of the memories you have of Don that you cherish.

CJ:  Every memory about Donny is great. I mean, I never made any secrets about how much I loved Donny. Its hard to watch episodes and just know I’ll never hear that southern drawl anymore. The great thing though is he touched so many people. Its just no secret what a beautiful human being he was. 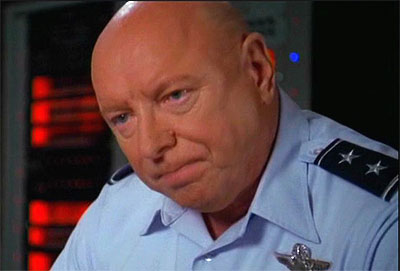 One of the greatest things about Stargate for me was that I got to be around Don Davis for ten years. Truly, for me.

GW:  Rage of Angels, its been in development on and off here for the last few years.  Where are things sitting with it right now?

CJ: Well, the great thing is, you know, people keep buying it. You know, I can’t talk a lot. Development of some sort has been going so long that I haven’t been able to talk about it.

My partner and I — my partner is Bill McDonald — who was one of the creators of Rome, we spent a lot of time at Starz developing it. They paid us really well for it. We thought that when Starz put it interim, then that would kind of maybe be the end of it. Or we would have to rejigger it, re-whatever.

Now literally, out of the blue, I got a — I haven’t even announced this yet, I was supposed to announce it on Twitter and I forgot.  Anyway, I just got through talking with some of the producers of the movie that I am doing literally right after The Dark Knight Rises. I have two days off and then I go to Virginia and the Bahamas for twelve weeks to do this movie, called To Have and to Hold, actually. They loved the concept, so — hopefully — I think Rage of Angels is being resurrected. We actually started talking to the studio again and believe it or not, its back on the table!  This business is just crazy.

GW:  What are thoughts on the end, for now at least, of the TV franchise? Stargate has been a part of the television landscape since 1997 and this year was the year that it finally disappeared, at least for a while.

CJ:  It’s weird!  It’s weird.  It’s weird because it has been part of the diaspora for so long that it was sad. It was sad to see it end. But, in the pantheon of television, I think we left a pretty darn good legacy. It was a mixture of sadness, but also pride in what everyone accomplished. From what started with Brad [Wright] and Jonathan [Glassner] and Coop [Robert Cooper] and [Michael] Greenberg and all those guys — all the different casts, and everyone.

You look at television, and television is littered with people who passed through Stargate. I remember as a young actor, if you were going to do or be anything you did the [21] Jump Street‘s. You did the Steven Cannell stuff, like Wiseguy, The Commish and Silk Stalkings. And then, it became you did MacGyver. Then it was like, if you were a black actor and you were going to work, you did Fresh Prince of Bel-Air. Through this whole thing. You look at TV now and where some big names have landed both in front of and behind the camera.  And they’ve all been through some of the various Stargate’s.

You know, the legacy that we’ve left I think is just fantastic.

GW:  Any message for fans?

CJ:   Yeah, I’m back! I just want to thank everyone for so many years of support — and their continued support. It will be good, too!  I had kind of stopped doing conventions for a while and I just wanted to hang out with my kids. I just wanted to be home and with my kids, and at least let them know who their dad is.  For 10 years, while we were in production on SG-1, I was barely around at all.  Now, my kids are at the age for “Dad, can you please get out of the house a little bit?”

Its good to kind of just reconnect with the fans and tell them thank you for so many years of support. Its really nice.

It’s good to see that Chris is doing so well. I look forward to seeing his new work in the near future.

Christopher Judge is the man, man!

I am very pleased to hear that Chris is doing well. I plane to see the Dark Knight movie. I hope the there will be more of Sancutary , but it does seem that SyFy likes to boot series off at five seasons. Also I am not sure that Amanda Tapping will want to return to another series in front of the camera, as she is also a producer on Sancutary, she will find active parts a little harder on the body then 15 years ago. If so I will shurly miss her beatiful self.

Christopher, why did “Teal’c” grow hair? I thought he looked more intelegent bald. He just looked more distuinqushed that way.