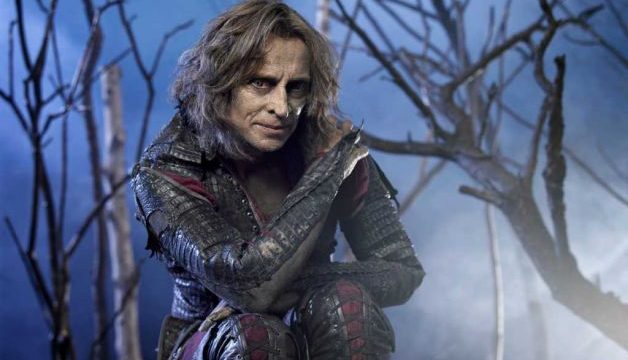 Every fall the big U.S. networks march out their new shows and see which will stick with audiences, and we always pay attention especially when there is some sci-fi or fantasy in the mix.  This fall season we’re especially watching Once Upon A Time, a new fantasy series that co-stars a recent Stargate veteran.

Robert Carlyle plays two characters on the new series, which stars Jennifer Morrison (House, Star Trek).  In the real world of Storybrooke he’s the enigmatic Mr. Gold; in the land of fairy tales he’s the impish Rumpelstiltskin.  Morrison’s character, Emma Swan, moves to the town and must separate truth from fantasy in a world where one may be just as real as the other.

Carlyle, of course, played Dr. Nicholas Rush on Stargate Universe for the past two years, and the film star decided to stick around the TV world after the show ended.  (His new show also films in Vancouver, B.C.)

Once Upon A Time premieres tonight — Sunday, October 23 — at 8/7c on ABC.  Check out the new show guide at our sister site, SciFi Stream, where you can post a mini-review of tonight’s episode after it airs! You can also post below and tell us what you thought of the pilot and Carlyle’s role.

Hey Darren, glad you wrote about this but you left out two other Stargate alums who are in this: Tony Amendola (Bra’Tac) and James “BamBam” Bamford are both in this (Amendola plays Japetto and BamBam plays a black knight). You can watch the pilot online legally via IMDB.com and I gotta say that its the best new pilot this fall IMO – liked it better than Terra Nova and it hooked me much better than ABC’s genre show last year, No Ordinary Family did and has me more excited for the first regular episode than that series did. Its from… Read more »

Poor Robert Carlyle, now he’s on another show that seems destined for cancelation. He just can’t get a break in the American TV industry, its too bad because Robert is a good actor. The 2011-2012 TV season is just not a good one for scifi shows.

I thought that the show was interesting, but not interesting-enough. It felt “small” somehow, and not memorable (definitely not a great pilot as LOST, or even SGU had). The only interesting character in it was Carlyle’s funny enough, but yeah, I don’t see this show sticking in. Like pretty much any other new show.

im really not gonna bother with this, give us stargate or give us death! on a side note anyone playing resistance 3 online “holla when u see me” clan tag [SG1]

Actually, I thought that the pilot had a lot of potential. Zap2it has it at 12.8 million viewers vs. Game 4 of the World Series 13.99 on FOX; Sunday night football 11.3 on NBC and the Amazing Race with 9.9 million on CBS. However, ABC advertised the show tonight saying OUAT had been watched by 16 million. I don’t know if that included DVRs or whatever. Even so, it did very well and may actually have won the night. Only tomorrow’s ratings swill tell the tale. I also thought that the casting was well done. Especially fun was Tony Amandola… Read more »

I don’t know if I would go as far as to say that it’s the best pilot this fall,but it definitely intrigued me enough to continue watching it,which says alot since it isn’t exactly my cup of tea.But the show has it’s charm and could in fact become a must see tv on a Sunday night for me,besides “Homeland” and of course amazing “The Walking Dead”. And according to numbers it most definitely has the potential to stick and last. Anyhow,Sunday this fall season has a very strong set of shows.I could even say,from my perspective and taking my taste… Read more »

I watched the pilot and its not one of the best story lines but has a good start.The show could bloom and be really good but that tbd.

Think it will last for 3 episodes or 4 before it’s canceled?

I hope OUT is better than Terra Nova… that one is sucking,,

Rush was creepy cool. The pilot was pretty cool will continue to watch!

Thought it was lame and boring, i suspect it will be canceled in a few weeks. How can Networks take this garbage over stargate?? Really.The first season of sgu was better.

@3531767 It’s not this over that,ABC never was a network for Stargate.Apples and Oranges.And with ratings of 13 mil it’s absolutely guaranteed it will not be canceled in a few weeks,in fact it’ll sooner get an extanded 1st season,or be already renewed for a second with numbers like that.Within few weeks.

I don’t think you guys ever mentioned Amondela was in it too! I was pleasantly surprised!

Ha,ha.yes Master Bra’tac is incredible! That guy doesn’t seem to age at all! I mean he already looked “old” when we first met him in season 1,SG1..but since then he doesn’t seem to have aged a day.At least to me.He always looks the same age,like he got to around 60 and just stopped aging,lol!And if I’m not wrong,he’s the only one who’s been in SG1 all the way,throughout all 10 seasons,besides three original cast members;Amanda Tapping,Michael Shanks and Chris Judge.

@ 3531767 at least they got the storyline out fast instead of dragging it on for a whole season ….

I have to agree about Terra Nova. I liked the pilot, but the first few episodes have been very dull, and the family friendly Spielberg stuff is a little tiresome to say the least. I enjoyed Once Upon a Time much more, and Carlyle is great in the fantasy world (and creepy in this one).