He was a friend to one of music’s biggest and most notorious legends. He has portrayed some of cinema’s most enigmatic villains.  But behind the various tough-guy roles he played is a man intensely devoted to the craft of acting.  A man proud of his roots and heritage — and an individual that consistently gives his time and talent to a wide variety of volunteer and charity work that is important to him.  Coincidentally, this actor — Robert Davi — also portrayed one of Stargate Atlantis‘ most dubious and compelling enemies in the series’ earlier seasons as Acastus Kolya.

GateWorld had the distinct pleasure to sit down with the legendary character actor when he was a special guest this spring at the Vancouver edition of the Creation Entertainment Official Stargate Convention.  In our time with him, Robert Davi discusses his start in the industry, what he took away from working with some of the greats, the threat of typecasting, his path to becoming “Kolya” and much, much more!

GateWorld: Thank you for taking the time to talk to us.

GW: Tell us a little about how you got your start in the industry.

The first thing is I was doing a lot of plays and stuff in high school. And then I got a scholarship to Hofstra University.  They had a theater department and a BFA [Bachelor of Fine Arts] program.  And they had a replica of the Globe stage.  I was also studying opera and singing. So I went to Hofstra, then finished and went to Manhattan and started to study with Stella Adler. And did about eight hundred performances on stage of different plays from Chekhov to Shakespeare to Ibsen to whatever. 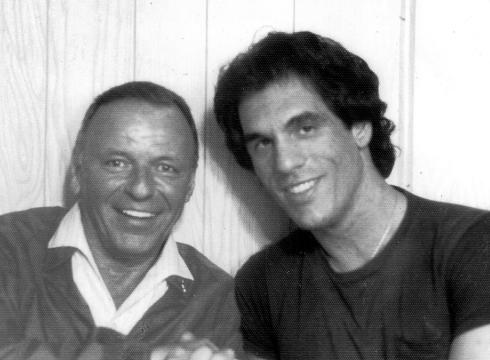 Later, they were casting this movie, Contract on Cherry Street, in New York with [Frank] Sinatra. The agent that I had at the time said that it was all cast and Sinatra was using all his friends and blah, blah, blah, blah. Typical stuff that you hear. So what happened was I then said to him, “Where is the casting office?” And he said, “It’s on Fifth Avenue at Columbia Pictures.” I said, “I’m going to go up there.” He said, “Go ahead! What have you got to lose?” I went up there and I went through security.  Normally people would stop you, but this security guy didn’t. I said, “Cherry Street?” He goes, “On third floor.”

So I went there, and I saw the casting director, and there was two women behind the desk. One was on the desk, one was behind the desk. I said, “I’m here to talk about Cherry Street.” I said, “I hear it’s all cast but I want to see if it’s available.” Then they said, “No, not quite. Do you have a picture and a resume?” I said, “Not with me.” So to myself I said, “Well, let me go get one now.”  They said, “Can you bring one tomorrow?” I went to the agent’s office and brought one back fifteen minutes later. They laughed. They called me the next morning and they said, “Come and pick up a script.” I did. They said, “Read these scenes and come back at six o’clock.” I read those scenes, came back at six o’clock. I read for this role, and I wound up co-starring with Frank Sinatra in my first film.

For three months over the summer in New York I did that.  And then became a friend of Sinatra’s.  And then they had to do some shooting in Los Angeles for three weeks. They flew me out to LA for the first time. Then put me under contract to Columbia at the end. That’s how I got started.

GW: Over the years, you’ve been involved in some huge franchises and individual properties, like The Goonies, Die Hard, Predator and the James Bond movies with License to Kill.   The list goes on and on.  Also some huge directors … John McTiernan, John Glen, [Steven] Spielberg, and Richard Donner.  What were those experiences like? 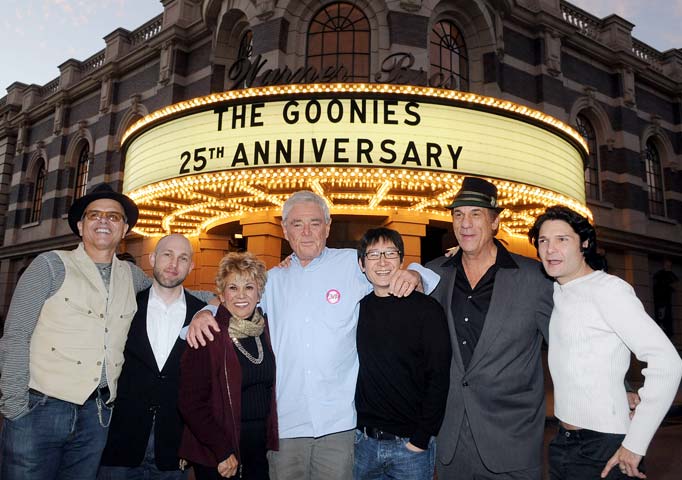 Davi with fellow cast and crew from 'The Goonies' during the 25th anniversary celebration.

RD: You learn from every one of them. Every director, your learn over the years the way to make it in this business.  It’s called professionalism. You know when you are learning from masters, and if you have more of an ambitious mind than just what you are doing at that moment, then you are looking at many different aspects to it. I don’t know if you know I directed my first film called The Dukes. It won nine awards. With myself and Chazz Palminteri and Peter Bogdanovich and Miriam Margolyes. When you get a chance, please look at it, Chad. I think you’d like it.

So, working with those directors, you find this sense of collaboration, the way they are working. Stylistic things, so it’s a learning experience.

GW: Do you ever worry about typecasting in the “tough guy” roles?

RD: Absolutely, you worry about it. But when you look at the history of guys like Humphrey Bogart, Edward G. Robinson, Spencer Tracy, Robert Mitchum, Lee Marvin, Charlie Bronson. Some of the greats, they all were typecast early on as the tough guy, the bad guy, and later on made a transition. So I always knew that at some point I’d branch out because I always knew I wasn’t just a type. I was an actor. I studied classically, I studied opera, I sang tons of different things. So I knew at a certain point.  And over the years, I did parts that were leading man. Not necessarily in huge films, but I did them.  And then I did Profiler for four and a half years and I played the leading guy there.  And that is as mainstream as you can get as far as being heroic. So I exercised my need for being the “good guy.”

Right now what I am doing —  if you Google my name, find “Robert Davi” and “the Wave.” The Wave is a radio station in Los Angeles. I just did an album with Phil Ramon, “Davi Sings Sinatra: On the Road to Romance”. If you Google that, you’ll be able to click down. It turns yellow after a few seconds, and you can then listen to some of the clips of the album that will be out in August [Editors note:  As of press time, the album had just released on October 24].

I have done three performances in New York. Sold out to eleven hundred people each. In Washington D.C., fifteen hundred. In Los Angeles, I had seventeen hundred people with a fifty-piece orchestra.  Two weekends ago, I was in Vegas.  And when the album comes out, I’ll be promoting it pretty heavily for the next few months after.  I’m negotiating that deal now, but check out the music, Chad.  You’ll be very surprised. 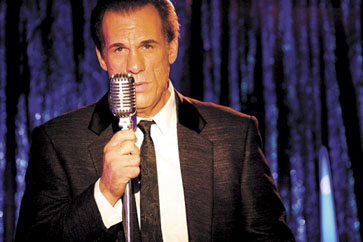 Davi co-wrote, produced, directed and starred in 'The Dukes,' chronicling a group of doo-wop singers desperate to revive their careers -- by stealing gold.

GW: I will, absolutely. Let’s talk a bit about how your casting on Atlantis came about…

RD: I got a call from the agent saying, “Hey, Stargate Atlantis wants you to play this character.” [laughs]

GW: So they were looking for you definitively for the part? [laughs]

RD: Yeah. That was it. I read the thing. I knew about Stargate. I knew Atlantis was a new show basically. I said, “I’m in.” It was a two-parter. And I came down and the guys were just terrific. The director, from Martin Gero, to Brad [Wright] and the whole team. And all the actors … it was just a great time.

GW: When viewers first met the Genii in Season One, it didn’t take long before we discovered their true nature. But when we first meet Kolya, in “The Storm” and “The Eye”, he possesses an almost singular focus on his objectives, which you conveyed so well on-screen. How did you approach building the character? Did you have an input into it, or was it all on the page?

RD: Yes and no.  They gave me the scripts, and I then of course said, “I have some suggestions.” And they said, “We’re all open.” They were very open for it.  Because, again they chose an actor.  Someone who has a bit of experience and they want that actor to bring what he can do. You know what I mean?  To help with the role.

There were certain things that were too “on”, that didn’t make him as layered as I wanted to. Because I am pretty good about having a sense of the overall. I’m pretty good at being able to do that, because it is about the character for me at that point and how the character fits into the story. So without destroying how the character fits into the story, you can make him much more layered, and you can give it much more texture and stuff. And any actor would do that based on his personality. I would hope that you would give an input. And they were absolutely open to it.  I gave suggestions and it was a great, great experience.

NEXT:  Davi talks about charities, voice work — and not being satisfied with Kolya’s death

A real class act and a great actor. I too thought that Kolya did not get the end he deserved and would have liked him to have a much bigger role than the 6 episodes he’s in. But then for the most part Stargate’s always had a problem with offings its villains and the fact that Kolya even had an end was surprising, to say the least.

the dude that would not die. last time he came back as a hallucination. i was glad he was not alive still.

Loved him in Die Hard, he had one of the best lines; making a radio call some time after arriving with his colleague of the same name but different race:- “This is Special Agent Johnson” (pause) “No, the other one”.

I agree that Koyla’s death was a missed opportunity, I loved him as Sheppard’s nemesis. Davi is a very interesting and classy guy, I wish him luck on his new project.

Stargate always made a habit of killing off great bad guys suddenly and without much ceremony. Tanith was probably the best example of this – he didn’t even get a menacingly sly last word in, and they killed him at the beginning of an ep that had nothing to do with him.

He was already one my top five character actors prior to his casting in SGA…so you can imagine me doing a Snoopy happy-dance when it was confirmed that he was going to be doing a character that season. But, hey, don’t even get me started about his ending/death in one of my most hated eps *ever* in all the Stargate versions– SG-1, SGA, or SGU– and that’s “Inexcusabl-“, er, “Irresponsible”. Like I’ve often voiced elsewhere on this site: The handling of Davi’s character is one of a string of flubbed storylines and actor miscues TPTB made in that infamous Season… Read more »