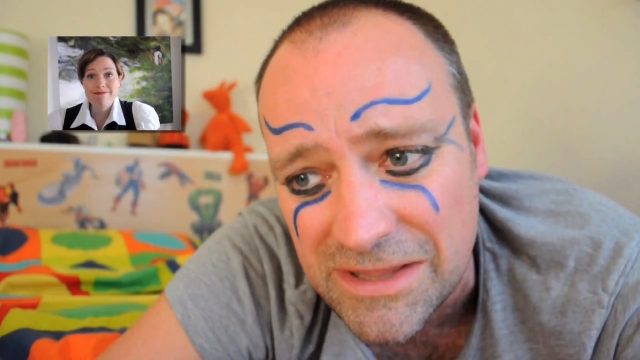 Brother-sister duo David and Kate Hewlett are at it again, this time starring in a brand new online comedy series called Assassidate!

In the webcam-based Assassidate, David plays a down-on-his-luck creator of an online dating site that is about to hit the big time.

They both wrote the first episode, and David directed and edited it.

(Thanks to Ryan for the tip!)

i cant wait to see the rest, and we do need stargate back

Umm, I’m so sorry, I really am, but I didn’t think it was all that funny. :(
But I love David and Kate and wish them all the success in the world with it!
Yeah and Bring Stargate Back!

I just really like to see the brother/sister relationship we got a little bit of in SGA. They are really entertaining together.

You should have Joe Flanigan on as one of the websites customers, women keep going out with him only to find out he’s still at war in his mind. You know completely nuts!!! Like they go to dinner and he starts cleaning his 9mm, or starts polishing his boots right in the middle of the olive garden!!! You could have Momoa on as a star hockey player who can’t make it through the first date because he keeps staring at their who whoos, an d grunting! And Dr Dave must help these guys straiten up before his company gets netfixed!!!… Read more »

Looks promising. I do think and hope that they will find some cameo roles for their Stargate friends.

And to those who keep saying bring back Stargate, neither David nor his sister have that power so save your breath.

I didn’t think it’ll like it, but I thought it was very funny.. It’s like McKay & Miller vs New Girl.. So much potential! Also would of been amazing if they could of used their SG chars xD

who forgot that mgillion was on alcatraz

@grimmdemise
true Paul McGillion was on alcatraz.
Ben browder was on chuck 2 weeks ago too.

Please bring back stargate! McKay was my favorite!