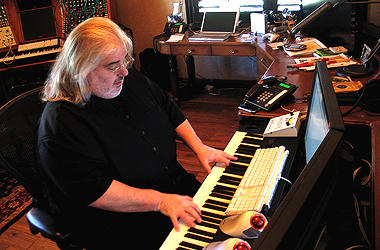 The Stargate franchise has lost an important voice.

Joel Goldsmith, composer of all three Stargate television series (334 episodes) and two DVD movies, passed away on April 29. He was 54.

“I’m utterly heartbroken at the loss of my dear friend and mentor Joel Goldsmith,” said fellow composer and frequent Stargate collaborator Neal Acree. “He was like a second father to me and I feel like I owe much of my career to the opportunities he gave me including my first feature film and first experience scoring television. His influence on my life, both personally and musically, will stay with me always.”

Joel was the son of famed composer Jerry Goldsmith, who passed away in 2004. The two collaborated to create the score for Star Trek: First Contact in 1996.

In 1997 Joel adapted David Arnold’s Stargate theme from the original feature film into the opening title sequence for Stargate SG-1. The composer also created the Emmy-nominated theme to Stargate Atlantis. He was nominated for two other Emmy Awards, including his music for the SG-1 Season One episode “The Nox” and the Atlantis Season Two episode “Grace Under Pressure.”

The cause of death has not been released.

GateWorld interviewed Goldsmith twice for his work for Stargate, during which he shared samples of some select moments from SG-1 and Atlantis. (Links to the interviews can be found below.)

The next episode of the GateWorld Podcast will include a special tribute to Goldsmith. Please call the hotline at 951-262-1647 to share your memories on air, and David and Diana will review them for inclusion into the show.

UPDATE: Deadline reports the cause of death as cancer. Our thoughts are with Goldsmith’s family and friends at this difficult time.

RIP, Joel. You will live on through your music, and all of us fans will miss you. Say hello to Don when you see him!

Sad loss. Music has a tremendous impact on our memories of movies and television. The music often stays in our minds long after other details fade away. Creative geniuses like the Goldsmiths and Elmer Bernstein are irreplaceable.

Wow, this is sad. In his honor, I will listen to the themes for Stargate SG-1 and Stargate Atlantis tomorrow when I am at work.

Incredibly sad news. My thoughts are with his family and friends at this very difficult time. Joel’s passing away is also a tragic loss to the music, film, and movie industries. He will be missed by many. Whenever his music is heard he will be remembered by fans all across the world.

talent definitely ran in the family.

Oh man, this is sad news. Was just watching the Stargate Atlantis episode Vegas on Universal HD and saw him as one of the poker players. SG would’ve been completely different if not for his masterful work. He will be missed.

I loved the music from both SG-1 and Atlantis. He will be missed.

I may not be a “musical person”, but I always thought he was a great composer, and was sad to see that he was fairly unknown – at least among the general public.

He really made a big difference to Stargate. Without the music he created Stargate would not be the same.

Listening to “The Nox” music now, really encapsulates the feel and magic of SG-1

this reminds me of the music in the last episode of season 5. at the end when they come back to abidos to find out anubis killed them all. amazing. they need to release more stargate scores.

Oh no… Did not see this coming. Rest in peace, Joel. You will be missed.

[…] utterly heartbroken at the loss of my dear friend and mentor Joel Goldsmith,” said friend and fellow composer Neal Acree. “He was like a second father to me and I feel like I owe much of my career to the opportunities […]

[…] of my dear friend and mentor Joel Goldsmith,” said fellow Stargate composer Neal Acree via Gateworld. “He was like a second father to me and I feel like I owe much of my career to the […]

[…] of my dear friend and mentor Joel Goldsmith,” said fellow Stargate composer Neal Acree via Gateworld. “He was like a second father to me and I feel like I owe much of my career to the […]

All my hopes and prayers go out to Joel’s family and friends. His death is a great loss to the Stargate community. I didn’t give much thought to the “background” music in movies or television shows– but that was “pre-Stargate”. As I began to watch, and re-watch, Stargate episodes, I realized that Joel’s music was more than notes to fill the empty spaces between words with sound. His music was the unseen performer, which went beyond words to express the core emotions behind each scene. Part of his genius was the way these themes were reused as a subtle method… Read more »

Oh no! I loved his music for SG1 and Atlantis! He will be missed. <3

[…] of my dear friend and mentor Joel Goldsmith,” said fellow Stargate composer Neal Acree via Gateworld. “He was like a second father to me and I feel like I owe much of my career to the opportunities […]

It truly is a loss and I feel grief for everyone touched by him. His imprint left behind is iconic with the unmistakable theme music that is Stargate.

He will be remembered, RIP…

May those in spirit/heaven gain as much and more pleasure from you and your music as we have had the privelage of having here. It will be wonderful that you will see you father again and others that you cared for. God bless. Quintin

Oh my! How did I not hear this? Joel was a friend of mine. We never got to meet in person but we spent hours online talking about music, movies and other things. This makes me feel really bad.