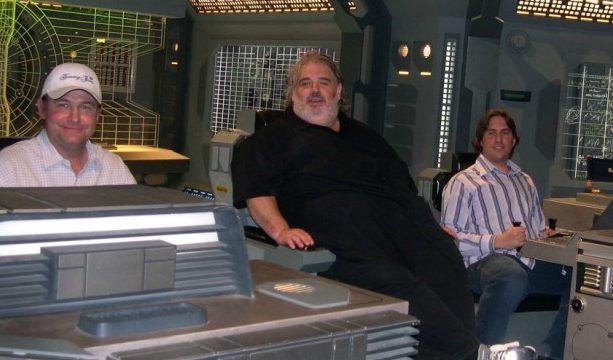 In this installment, David and Diana spend an episode of the GateWorld podcast celebrating the life and legacy of Joel Goldsmith, composer of all three incarnations of the Stargate television series, who passed away on April 29 at the age of 54. As a special treat, the two are joined by Joel’s long-time collaborator and friend Neal Acree, who assisted Goldsmith since Season Three of SG-1.

They also take time to discuss Epilogue, the new Web series Diana has been busily producing, and offer up a hint of the project’s caliber by inviting you to view “Apollo,” a sci-fi film previously produced by Botsford and her students! Epilogue’s trailer premieres March 25! You’ll find the links below, including a special link to photos of Joel, provided by Neal!

Call the Podcast Hotline! We want to hear from you! Ask David and Diana a question, suggest a topic for a future show, or just sound off on Stargate and the state of science fiction. Leave a voicemail on the Podcast Hotline number below.

Leave us a voicemail on the GateWorld Podcast Hotline any time, day or night!

Listeners outside the U.S. can use Skype to call for just 2 cents per minute. Or, record a brief message on your computer and e-mail the MP3 or WAV file to us. You can also leave a comment below, or post on the Podcast Feedback thread at the forum.

Funny that you guys talk about subtle music when there’s incredibly dramatic and not at all subtle music playing over it. Which took away from the interview.

I enjoyed the interview. My favorite Joel Goldsmith is the theme to Stargate:Atlantis. I know that he did it in the style of David Arnold, but he also, in the chorus, reminded me of Debussy’s Engulfed Cathedral. And, I loved the music in Continuum, esp. the music when they are trekking across the Artic and New Identities. These were truly epic themes…just gorgeous and poignant.

#133 is not available for download on the Podcast page https://www.gateworld.net/gateworld_podcast.shtml Can you please upload it there?
Thanks

Hi again, managed to figure out the link myself :)
http://stream.gateworld.net/podcast/media/GateWorld-Podcast_2012-05-23.mp3

Do not forget to vote for Stargate Universe. The show can be revived by Netflix.
http://www.giantfreakinrobot.com/scifi/10-cancelled-scifi-tv-shows-netflix-bring-terra-nova.html