Things changed quite a bit in the ninth year of Stargate SG-1, with new cast members and a brand new leading villain: the Ori and their zealous followers, bent on converting our galaxy. But which episode, which character moments, which tech is the best of the season?

Earlier this month fans nominated their favorite episodes, character moments, villains, technology, and more, which were then put on a ballot and voted on by fans around the world. Here are the winners!

Join us all through May for the Stargate Rewatch, as we work our way through the final season of SG-1! Check back later this week to nominate your favorites for next month’s awards. 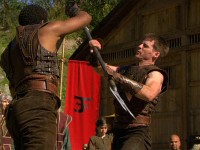 Trial By Blood. Mitchell pushes himself through the grueling and unrelenting training of the Sodan to prove himself and get through to their leader, Lord Haikon. 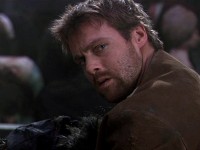 Fallen Friend. Daniel is forced to watch Vala burn to death, and comforts her after she is miraculously resurrected by a Prior of the Ori. 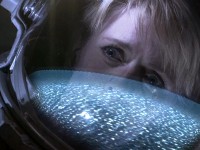 Mass Destruction. After a failed attempt to go EVA and disable the Supergate, Carter watches helplessly as Ori warships decimate a fleet of ships from the allied races from the Milky Way. 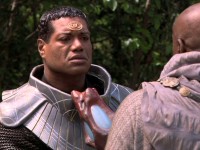 Rekindled Honor. After a heated debate, Teal’c takes Gerak — now an Ori Prior — to a Jaffa memorial site and convinces him to save Earth from an Ori plague at the cost of his own life.

From: “The Fourth Horseman, Part 2” 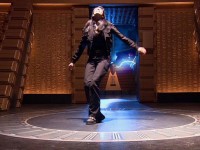 Unexpected Sacrifice. With the Ori on the verge of gaining a beachhead in the Milky Way, Vala risks her life to pilot a cargo ship to destroy the Supergate before it can be activated. 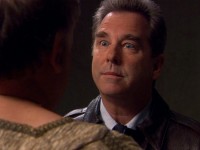 ‘You will descend …’ When Earth’s plan to destroy the Supergate goes awry, Landry demands answers from Nerus — finally using the threat of starvation to coerce the gluttonous Goa’uld. 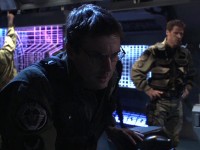 Unified Front. Having assembled an alliance of enemies and allies from all over the galaxy, SG-1 works together at the Supergate to try to stop a full-scale Ori invasion of our galaxy. 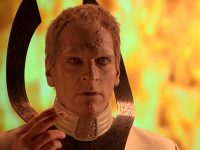 The big new threat to the galaxy, the Ori are ascended beings who use their power to coerce the worship of mortal beings. Can it get more evil than that?! 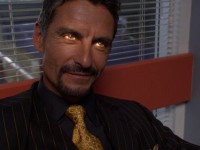 Repeating his victories in this category from Seasons Six and Eight, the former System Lord proves that you can’t keep a good Goa’uld down! From an Earth hideout to clones to secret brainwashing, this year was a big one for Baal. 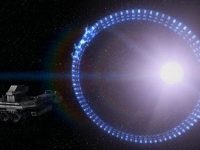 Just when you thought you knew what a Stargate was, the Ori go and reinvent the wheel … literally! Made up of dozens of huge segments, a Supergate is big enough for a warship and can connect a wormhole between two distant galaxies. Better call for backup. 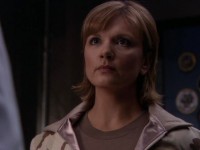 She was a fan favorite for seven seasons before being killed off, so we were thrilled to have the great Teryl Rothery back when Dr. Fraiser stepped through the Stargate from a parallel reality. It was just long enough to say hello … but it’s great to know she’s alive out there, somewhere. 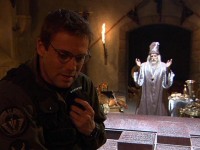 The Ori threat, Earth’s expanding fleet, the search for Merlin’s secret weapon … it’s all leading up to this! SG-1 finds the legendary city of Camelot on another world, unites races from all over the galaxy, and is drawn into an epic confrontation with the Ori invasion fleet.

Join the Stargate Rewatch for Season Ten, all through May! We’re revisiting all 17 seasons of Stargate history from the beginning — one season each month, through the end of 2012. Stay tuned to find out how to nominate your favorite episodes and character moments for the May awards.

Good picks, but I just can’t help but sing the Monty Python Camelot song every time I think of that episode.

BEST CAMERON MOMENT was when he broke the vending machine because he found out his friend was going to die.

BEST GUEST STAR was not teryl tothery. why? because when she showed up. it was like…. ooo ahh its her! but its not our her. shes dead. why all the needless attention? good appearance idea though. also jack should have guest appeared as a sg1 team leader in that episode.

I think Season 9 was pretty good on the whole considering Richard Dean Anderson’s departure. They did a good job with introducing Ben Browder, Beau Bridges and maintaining a healthy dose of Claudia Black. Season 9 also had the right balance between comedy and drama unlike season 10, which tried to be comedic far too often. A solid season and good picks.

What about Martuf as favorite guest star?