It’s hard to believe that we’ve crossed the finish line for SG-1‘s part in the Stargate Rewatch! Our 17-month project to rewatch the entire Stargate franchise has ended its tenth month, and it’s time to reveal your top picks for the best of Stargate SG-1 Season Ten.

We asked fans to nominate their favorite episodes, character moments, villains, technology, and more, which were then put on a ballot and voted on by fans around the world. The two SG-1 movies each got their own “Best Moment” category, with the other categories limited to the 20 hours of Season Ten itself.

If you want to contribute to the Stargate Atlantis Season One ballot, you can nominate your favorites right now at GateWorld Forum! We’ll be officially kicking off our Atlantis rewatch this week, so fire up those DVDs and Blu-rays and stay tuned for more on GateWorld. Learn more about the Stargate Rewatch here.

On with the winners for SG-1‘s final season: 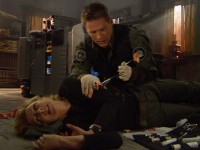 Under Cover. Inside a cloaked field in an alien village, Cameron tries to keep an injured Sam alive while preventing the invading Ori army from discovering them.

From: “Line In The Sand”

Compromised. Daniel returns to the team after being captured by Adria and turned into a Prior, and must convince Jack and the rest of the team that they can still trust him. 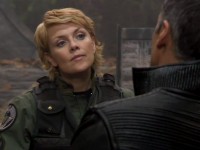 One Baal, One Strike. After Baal taunts her for being a weak woman compared to him, Sam punches the smarmy Goa’uld squarely in the face. 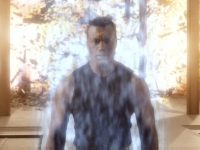 Into the Breach. After 50 years on the Odyssey Teal’c enters a time bubble to save the ship and his friends, risking his life while knowing that only he will retain his age and his memories from the ship. 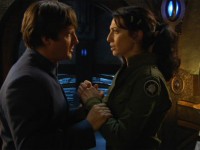 A Good Man. Vala confronts Tomin about what he is doing in the name of his gods, laying the seeds of his later change of heart.

From: “Line In the Sand” 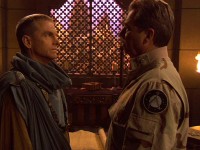 Mass Murder. Landry joins Bra’tac on Dakara to convince a Jaffa leader to quit using the Ancient super-weapon against the Ori, as it is killing innocent people across the galaxy. 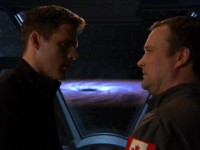 Twice the Team. SG-1 teams up with Atlantis to dial the Supergate, blocking the Ori and destroying both an Ori and a Wraith warship in the process.

From: “The Pegasus Project” 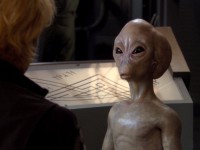 Unable to solve their cloning problem, the Asgard conclude that their civilization is at an end and commit mass suicide by destroying their own planet — but first, Thor tells Colonel Carter that the Tau’ri have become “the fifth race.”

The leader of the Ori invasion force is a beautiful woman, sired by the evil ascended beings … and the daughter of Vala Mal Doran. Without hesitation or remorse, Adria conquers whole worlds and destroys the super-weapon on Dakara, dealing a major blow to the young Free Jaffa Nation. 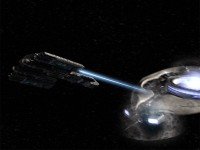 The Asgard may be gone, but their legacy goes on when they equip Earth’s ship with advanced weapons, shields, and a computer core containing the whole of their recorded culture. 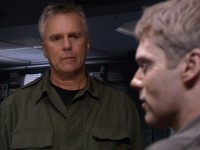 With his friend returned and transformed into a Prior of the Ori, Jack questions Daniel Jackson in an attempt to decipher whether he has truly been turned — or if he’s telling the truth about his plan to take out the enemy. 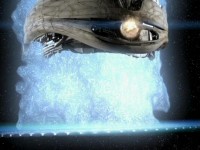 In SG-1’s big crossover episode the team travels to Atlantis to dial a Stargate to the Ori’s Supergate, in order to cut off the enemy’s point of entry to the Milky Way … taking out an Ori warship and a Wraith cruiser in the process! 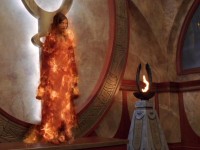 Showdown. Challenged by Daniel for her refusal to get involved, Morgan Le Fay finally confronts a weakened Adria in a cosmic battle. 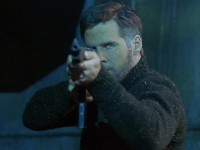 Ambush. After losing his friends in battle Cameron Mitchell travels back to the past and surprises Baal on board the Achilles, shooting him in the head and restoring the future timeline to what it was.

Join the Stargate Rewatch for Atlantis Season One, all through June! We’re revisiting all 17 seasons of Stargate history from the beginning — one season each month, through the end of 2012. Stay tuned to find out how to nominate your favorite episodes and character moments for the June awards.

I’m surprised to see that The Quest Part 2 only got 14%. It’s by far by favourite episode of that season for many reasons (that I cba to go in to)

Just a head’s up – Joseph Mallozzi has started a retrospective on his weblog of his time on Stargate Atlantis. What great timing, just as the Atlantis Rewatch begins!

Thanks for the tip, Joe. That is some very interesting reading. Mr. Mallozzi has a very entertaining and diverse blog.

The best Daniel moment was when he first saw Atlantis. How could people not view for that?