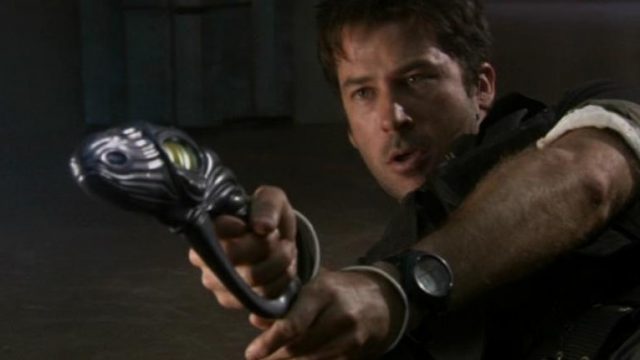 With Atlantis saved from a Wraith attack (for now), the adventures of the Atlantis expedition continue! This month we’re looking for the best of the best from Stargate Atlantis‘s second season, which aired from 2005 to 2006.

Vote now for your favorite episodes, character moments, villains, and more … part of the Stargate Rewatch!

Earlier this month we took nominations, and the most-nominated appear on the official ballot below. New this month are categories for Best Ronon Moment and Best Beckett Moment. If you don’t see your favorite, be sure to come back in early August to nominate for Season Three! If someone doesn’t nominate it, it can’t appear on the ballot for voting.

You don’t have to be a Rewatch participant to vote, but please vote only once! Voting will close on July 31, and we’ll announce the winners for the month before the Stargate Rewatch continues into Atlantis Season Three in August.

Having a heck of a time voting. It keeps saying There Was A Problem but also Ballot Submitted and still gives me the poll with blank radio buttons.

Hmm. May be a bug in the poll script since the last upgrade. Any chance you are leaving one of the questions unvoted?

Having the same problem as Sylvia..

I mean on the shepard ballot

July 22, 2012: Vote for The Greatest Season-ending Cliffhanger in Stargate History! The Evolution of Akemi at Starbucks! Back to the Kits Street Fest for Dinner! « Josephmallozzi’s Weblog

Totally of topic, But for anyone who was bought the Stargate Atlantis Action figures (I have at least 2-3 of EVER one) It is really annoying that most of the characters come with a Zat as part of there acc. The only Zat used in SGA was in S03E10 “the Return pt1” when shep zats a former sg team member. That scene also shows beckett with his arms on the guy when shep shoots him, and the next camera angle show beckett catching him. (bad editing)

Hahaha, its funny when Rodeny refers to Ronin as Conan in Epiphany…

Well I voted, no tech issues thankfully. (Actually a week ago but forgot to post here!) Thanks very much to the mods for doing this, – Atlantis season 2 is where I get off the bus though. Its been great to revisit some great eps and character moments across both SG1 and Atlantis.

I will be very disappointed if ronons gun does not win the coolest technnology. It is by far the best