Browse: Home / 2012 / August / Watch the trailer for Jason Momoa’s Bullet to the Head 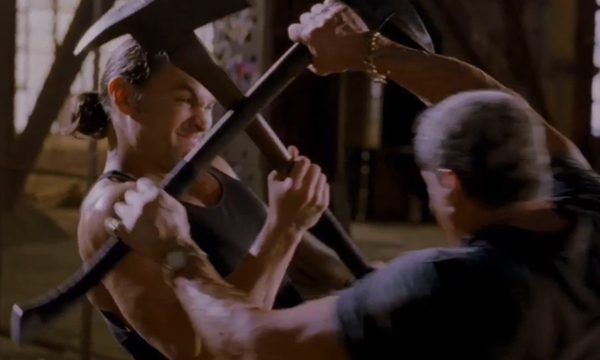 Last summer we told you about Jason Momoa‘s next high-profile film role: Sylvester Stallone’s Bullet to the Head (story).  Today the first trailer for the movie is out!

Momoa (Stargate Atlantis‘s Ronon Dex) plays Keegan, the film’s chief villain who becomes a target for Stallone’s character after murdering his young partner.  The movie looks to include a number of throw-downs between Momoa and the veteran action star.

Bullet follows a New Orleans hitman (Stallone) who forms an alliance with a New York City cop (Kang) to take down the man who murdered their respective partners.

Watch the trailer below, courtesy of IGN.  Bullet to the Head will reported be released next February. The official movie site is at BulletToTheHeadMovie.com.

(Thanks to wolverine_nl for the tip!)

Not exactly my kind of movie, but damn does Jason look hot!

Actually, it IS my kind of movie. Yes, Jason looks good but I’m more interested in Sarah Shahi who plays Sly’s daughter. In a word: HOT!

This doesnt look too bad, although the only problem I can see here is that if Jason’s the bad guy, he’s no doubt going to get killed by Sly of all people T___T

I’m glad he’s getting work with stallone. Hopefully he’ll become a huge action star (more than he is now. Now, he mostly plays the villian role, (except for conan, yes), but he’s yet to get his “hit” movie)

oh my they are all hot, i cant wait to see this movie