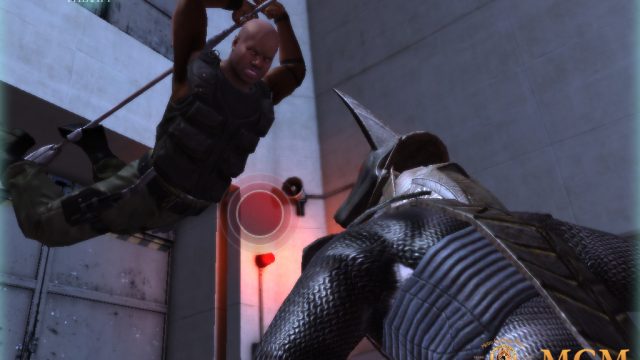 The Stargate Command app is getting a fun addition this Thursday, and it’s in the rampant warrior category.

“Teal’c’s Revenge” will be added among the features of the popular iOS app beginning December 13, and will sport the shol’vah battling against Jaffa, Go’auld and Replicators. Diana Botsford and I recently got the opportunity to demo the add-on a week in advance, and we wanted to share our thoughts just before the release!

Get a look at some of the in-game experience with 10 exclusive screenshots courtesy of Arkalis Interactive, the game’s developer!

I have to be honest that I was puzzled at the lack of content in this app for so long. Then Diana and I got the chance to review “Teal’c’s Revenge”, the new add-on, and I can see now whey they’ve waited to put out more. This is a meticulously-crafted expansion.

“Teal’c’s Revenge” is one of the most absorbing and entertaining games I have played on my iOS. The tutorial gets you up and running quickly, teaching you the basics of how to defend yourself in close combat by making you familiar with the gestures you have to make in order to block, parry and attack. At the same time you get to play in different S.G.C. environments that have the colors and textures of the real Stargate Command, so you do get a sense that you are there.

Diana Dru Botsford, current co-host of the GateWorld Podcast (and owner of an iPad), also had her thoughts to share: “Arkalis has crafted a lush, intense and fully realized environment that looks and feels like Stargate at its best. The movement and fighting techniques clearly are stylistically inspired by episodes such as ‘The Warrior’ and ‘Threshold,’ using 360 hyper-realized imagery to add a wallop of a gaming experience.  Graphics are smooth and immediately responsive. Applause must also be given to Arkalis for their tutorial.  Simple, clear, and immediately rewarding.  Within moments you will be playing, inhabiting the role of Stargate Command’s much-loved resident Jaffa.

She continues: “If I had any quibbles, it would be a lack of sound.  I’m not looking for full-on, blow-by-blow sound effects, but a few well placed bits such as background ambiance — or better yet, a piece of Joel Goldsmith’s music — would make this game all the more immersive. Because that’s where we want to be when playing a game this fully realized: immersed in the world of Stargate.  Fingers crossed, we’ll soon see components like this for the rest of our beloved characters: Jack, Daniel, Sam, etc.  Arkalis has demonstrated that they’re the right team to make it happen.”

The “Teal’c’s Revenge” add-on will be available as a 99 cent upgrade this Thursday, December 13. The app currently takes up approximately 55 MB of space on your device, so your iPhone is anything like mine you will have to be connected to a wi-fi network to download it.

Watch the trailer below to see the app in action!

This is annoying. 1. I have a droid. 2. Nothing Atlantis related?

Any word on an Android Version?

Not to sound like the broken record sure to fill this, but when the eff is an Android version going to be released?

Another vote for the Android version.

Grab our torches and pitchforks?

Another vote here for an Android version.

Can’t wait!!! :-) I love the Stargate Golf game, but I REALLY want a fighting game!

Yes, it’s not on Android. I urge the developers to NOT look at any other platforms but to focus on the iOS system. This app has been updated once over a period of months – focus on finishing the core app first, on the platform where it started.

I too call for an Android app.