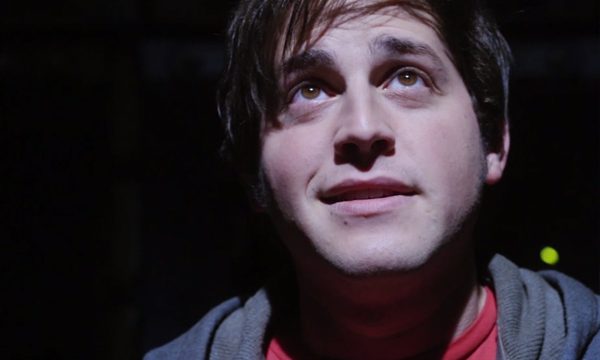 Before the 2018 Web series Stargate Origins, the last live-action project was the final episode of SGU in 2011.

‘Our mission is — and always will be — the journey itself.’

All this month we’ve watching the final season of Stargate (so far) — SGU Season Two — as our final leg of the Stargate Rewatch! You’ve voted on the best episode, character moments, tech, guest stars, and more — and now it’s time to unveil the winners.

Stay tuned to GateWorld in 2013! We’ll be rolling out some new regular features, and revisiting the glory days of Stargate SG-1, Atlantis, and Universe while we await word from MGM on new productions. 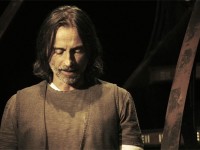 Final Plea. With a way home now open to the crew, Dr. Rush gives a speech asking for volunteers to stay behind on the ship and see out Destiny‘s mission. 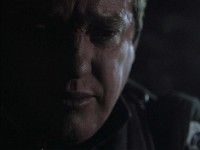 Last Breath. After Sgt. Riley is critically injured, the anguished Colonel accepts the young man’s plea to end his suffering and smothers him with his bare hands. 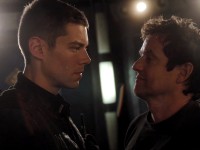 On the Edge. Refusing to give up his faith in the Colonel, Lt. Scott confronts his leader and brings him back from the edge of a breakdown — telling him it is time to step up and command again.

From: “Trial and Error” 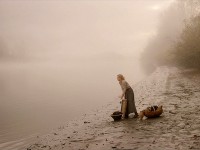 A Life Not Lived. T.J. discovers she is afflicted with a terminal disease, watching kino recordings of herself succumbing to the disease in an alternate timeline. 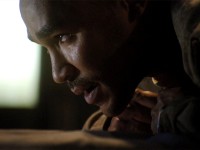 Saving Lives. When Dale Volker needs a kidney transplant to survive, Greer volunteers for the dangerous surgery without a moment’s hesitation. 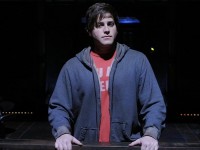 Man Alone. With newfound confidence, Eli volunteers to stay behind and try to fix the ship’s last stasis pod — taking one last, bittersweet moment alone on the observation deck. 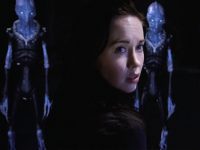 Enemy Hands. Realizing she eventually had to return to the aliens, Chloe fearlessly accepts her fate when Young gives her up to them to save everyone on Destiny. 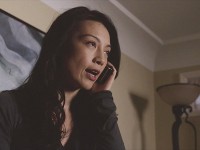 Make It Happen. Camille pulls strings back home to get Eli’s mother on board the Destiny via the communication stones, to see that her son is alive and well and doing what he always wanted. 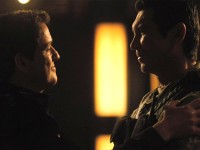 Cavalry’s Charge. With Destiny under attack Telford and the Ursini fly to the rescue, destroying the drones in a star and offering a plan to attack the mothership that is controlling the automated drones. 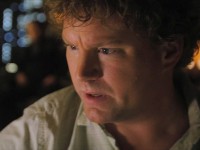 One of Destiny’s unsung heroes, Dr. Dale Volker is a brilliant scientist and engineer forced to toil in obscurity under the genius (and arrogance) of Nicholas Rush. This year Volker fell in love, had his heart broken, and received a kidney transplant. All that … and saving the ship a dozen times over! 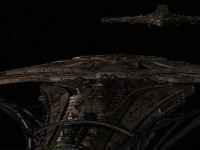 A year after the team gated onto the Destiny they finally caught up with one of the other ships built by the Ancients and sent ahead. The fully-automated seed ships have Stargate-manufacturing facilities on board, and place gates on planets to provide Destiny with a basic supply line. 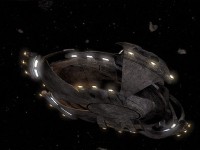 The crew of Destiny managed to survive and outrun their enemies … until they woke up a fleet of automated weapons left over from a long-dead war. Taking orders from massive control ships, the drones are a relentless force that seemed to cut off Destiny at every turn. 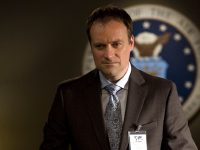 The great Rodney McKay puts his remarkable brain to use when he joins Richard Woolsey and Everett Young in a plot to dial the Langaran Stargate to Destiny. The plan may have been amoral and ill-conceived, but it did let Rodney take a trip to Destiny with the communication stones. 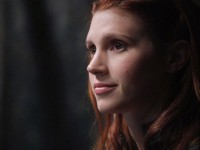 Destiny got at least one good thing out of the Lucian Alliance invasion: Ginn, a plucky young scientist with a brilliant mind and no love for her former associates. Ginn was put to work with Eli and the two became romantically involved … before she lost her life for betraying Alliance secrets to Earth.

From: “Trial and Error” 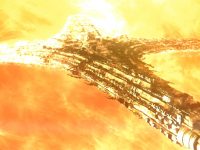 The team dials back to Earth from inside a star, putting Destiny at risk and twinning the ship and everyone on board. Inching out “Epilogue” by fewer than 10 votes, SGU fans pick this mid-season time-twister as the best of the season.

Thank you for joining us for the Stargate Rewatch project! We hope you’ve had as much fun as we have. Stick with GateWorld in 2013 for some new regular features.

In the meantime, why not post about your Rewatch experience below?

Amazed that Lisa Park came in 3rd in Best Supporting Character when I feel like she was the only 1 of the 3 that people nominated in the forum. And Twin Destinies was far from the best episode. The other 4 options here were all much better.

Agree to all but Gauntlet was the best. Great end to a great show and the best series. The continued journey. And on a personal note. Seeing doctor Lee in Eli’s clothes without his glasses was hilarious.

So, what now? Are you going to do the “Stargate Infinity” awards? Or maybe the movies? With no new “Stargate” happening, this site’s going to be little more than a ghost town of updates.

The only thing about the “Seizure” crossover that disappointed me was the fact that they went to Langara and we didn’t get to see Jonas Quinn! I’m sure Corin Nemec would have jumped at the chance to cameo when they visited his character’s home world.

we should do a ‘best-of series’ poll now. like a best sam/jack moment. best season, best mckay/carter moment. stuff like that!

ZJW88: Usually the proportion of nominations are reflected in the proportion of the final votes, but this month had a couple of oddities like that. Park was far and away the most nominated in her category, but third in the voting. And Julie McNiven was the least nominated (I think I nominated her myself to get the ballot up to a total of five choices), and ended up winning by a wide margin. Kyle: Stay tuned in 2013! We do have some plans for some new features. And, of course, we’ll continue to cover breaking news on Stargate tie-ins, licensed… Read more »

Kyle: Don’t give in to despair. Difficult to see and always in motion the future is.

@Pioneering I couldnt agree more.i want more stargate more than anyone but it will prob take some time. the good news is MGM is back on its feet. I heard SKYFALL did really good in the theaters, maybe they will realize that there long running money making franchises like Bond and Stargate is the way to move foward, and stop making shows like teenwolf and the other garbage. The most important thing is that when we do get new stargate, we dont treat it like many fans treated sgu. Because the reason sgu got cancelled is many sg fans boycotting… Read more »

I bought Season 1 on Blu-ray, and I refuse to buy Season 2 on dvd only as it is obviously inferior quality. Come on MGM, release it on blu-ray, even if it’s a very basic set of discs.

Also please finish the story off, the Fan’s deserve it, tie it in with SG1 and SGA and You will definitely have a money spinner on Your hands

Hope it comes back in the next 5 years or before SGU Is still the best.

finaly finished SGU for the first time….damn….so frikken sad. I can now say ive watched every single stargate episode in existance. all 17 seasons. I really want this to come back….its not fair to the fans, yesterday i saw wrestling on syfy….i got so pissed. If David Hewlet can do anything to bring it back…id be the happiest person in the universe!!!

Everyone pumped for the Stargate Infinity rewatch?

Your opinion is noted… but the facts and viewership numbers do not agree with your opinion.

The SG fans *did* speak. The non-SG fans (with the actual Neilson boxes to measure watching eyeballs in the U.S. markets) also spoke as well…

Even if you’re right, it’s not necessary to follow the “herd effect.” Because the best work of art, created not by the willingness of the crowd, but in spite of it.