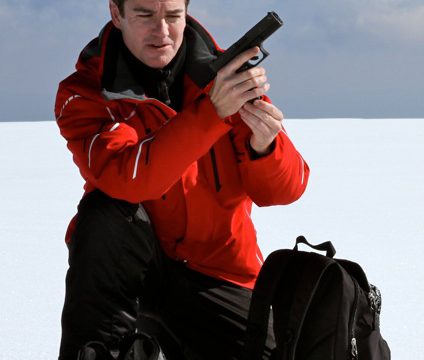 Stargate Atlantis‘s Chuck Campbell is gating from the lost city of the Ancients to a frozen mountaintop. He co-stars in Syfy’s newest original movie, Abominable Snowman.

Campbell played the recurring role of Technician Chuck (or the “Chucknician”) on Stargate Atlantis.

In the new movie he co-stars alongside Adrian Paul (Highlander), in a story about a group searching for their missing friends in the midst of a terrible blizzard … where they make a “chilling” discovery. They must battle a man-eating Bigfoot, the blizzard, and avalanches to find their people and escape the mountain alive.

Here’s the full story description from the film studio (with some SPOILERS for the early moments of the movie):

In 1992 GLACIER PEAK, WASHINGTON a small group of back country skiiers climb Glacier Peak, one of most remote mountains in the Cascade Range. Lead by JAKE TANNER, a group is somewhere high up on the mountain where they disappear and are never seen again.

PRESENT DAY – GLACIER PEAK. A helicopter soars over the snowy peak. In the rear cabin is a U.S. Special Forces member fresh off a long tour in Afghanistan: BRIAN TANNER. Brian is Jake’s son who is now going to find out what really happened to his father. As he flies in, we see he is checking his gear; a satellite phone, automatic weapon, clips and a number of grenades — he is preparing for battle. After being dropped off on the peak, he skis on the edge of disaster — just ahead of an avalanche, but he is not fast enough to outrun it. It catches him and takes him over a cliff in a massive white wave of ice, snow and destruction. It appears that Brian is gone … no one could’ve survived.

Lead by Brian’s sister NINA, she is joined by a team of world class skiing and boarding experts who are going by helicopter in for a rescue mission to find her brother. With a storm moving in, they have just 24 hours to find him and reach the rendezvous point or they’ll trapped on the mountain facing certain death.

After combating a raging blizzard, the team finds Nina’s brother on the mountain — alive! But now the group learns the truth about the legend of Glacier Peak. They will now have to battle their way down the mountain, skiing and boarding on the edge of disaster — avoiding massive avalanches and hopefully getting to the helicopter before they are all left for dead.

Check out the Syfy teaser below! After that is a longer trailer from 2011, when the film was apparently completed by UFO International Productions under the title Deadly Descent: The Legend of the Abominable Snowman.