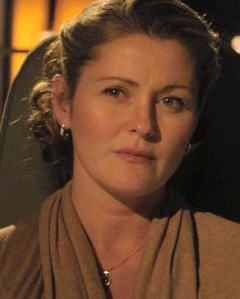 The actress behind SGU‘s Gloria Rush is on board for a high-profile genre pilot. Actress Louise Lombard has been cast in the pilot for The Selection at The CW.

Based on the novel by Kiera Cass, The Selection is set in a futuristic world where a working-class woman is chosen by lottery to compete with 25 others on a Bachelor-like reality show to be the next queen of the realm.

Lombard — who viewers may also recognize from her 3-year stint as Sofia Curtis on CSI — will play the current monarch, Queen Amberly. She’s described as “refined, intelligent and beloved by the people, Queen Amberly is a canny political player within the palace, and knows everything there is to know about every single girl in The Selection competition” (Deadline).

The Selection was in pilot contention last year, and while the network wasn’t satisfied with the first pilot they were still keen on “The Hunger Games meets The Bachelor” concept and commissioned a rare second pilot — complete with a rewrite and a new cast.

Coincidentally, the role of the Queen was also played by a Stargate vet in last year’s pilot. Leonor Varela — Chaya Sar from the Stargate Atlantis episode “Sanctuary” — originally had the role.

The network should decide by May whether or not The Selection will be picked up to series, and appear on screens in the fall. The series is in contention at The CW with several other genre pilots.