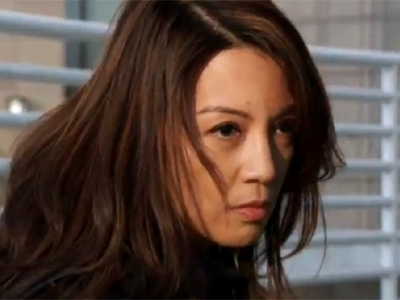 ABC gave viewers a 30-second peek at the new Marvel television series Agents of S.H.I.E.L.D. on Sunday night, but it pales in comparison to the first full-length trailer released today.

The new show has been green-lit for the upcoming fall season, and co-stars Clark Gregg as Agent Coulson and Stargate Universe‘s Ming-Na Wen as Melinda May.

May is a pilot and martial artist, and we get our first good look at the character in action in this trailer. Enjoy!

Brett Dalton also stars as Agent Ward, along with Iain De Caestecker as Leo Fitz, Elizabeth Henstridge as Jemma Simmons, and Chloe Bennet as Skye — “team” members all introduced in the trailer.

Agents of S.H.I.E.L.D. will air Tuesdays at 8/7c this fall on ABC. It’s part of a strategy to revamp the network’s approach to one of TV’s most competitive nights, putting the fall’s hottest new show (based on a multi-billion-dollar film franchise) up against TV’s highest-rated drama — CBS’s NCIS.

Stick with GateWorld and our sister site, SciFi Stream, for more!

Oh, well. I was hoping this series would be worth watching, but apparently not.

@Retiredat44
this show is from whedon, and when u know firefly then u have to admit he know how to develop a series , i´ve been optimistic for that show

Ooh, this looks promising! The fact Mr Wheadon is the showrunner is a major plus straight away.

I just hope its a success, and we get it in the UK.

Whedon has a magic touch (so far). That alone will make it worth checking out.

Heroes? This looks lamer than the worst of that! As for Whedon’s involvement, he has produced pretty as trash as well.. even so, it’s not like he’s going to be 100% hands-on with this.