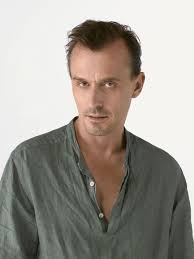 He was the sinister and extremely dangerous Lucian Alliance soldier Simeon on Stargate Universe — not to mention Prison Break‘s “T-Bag,” the role that made him famous. Now actor Robert Knepper has landed a pair of major roles — one on the small screen, and one on the big.

Lionsgate announced today that Knepper will appear in the final two films in the Hunger Games saga, Mockingjay – Parts 1 and 2. He’ll play President Snow’s minister, Antonius. (The character is not in Suzanne Collins’ novels, according to Variety.)

Jennifer Lawrence (Katniss), Josh Hutcherson (Peeta), and Donald Sutherland (Snow) reprise their roles in the final two films, along with newcomers including Julianne Moore as Alma Coin, and Natalie Dormer (Game of Thrones) as Cressida.

The two Mockingjay films are being shot back-to-back in Atlanta, and will hit theaters in November 2014 and November 2015.

On television, Knepper has also just been cast as a DC villain in an upcoming episode of Arrow. He will play the criminal mastermind William Tockman — a.k.a. the “Clock King,” TV Line reports.

His guest role will be in episode 14 of the current season, so look for it in early 2014 on The CW. Arrow airs Wednesdays at 8/7c, with new episodes resuming January 15.

He was also on an episode of Blacklist

I have yet to see this guy in anything good. I’ve only seen him in Stargate Universe and Heroes and he sucked in both. Not enough to make a judgement either way.

Knepper’s SGU and Heroes roles weren’t memorable, but he was most famous in Prison Break.

He was awesome as T-Bag!

@jimv1983 LOL I was going to say exactly that! Not saying he’s a bad actor, maybe they should give him a different type of role, not the conniving villan type of thing.

He is great his role in SGU WAS Really great.

Did you know that negative characters harder to play than positive characters. Actor’s face makes him act in a certain type of roles. That does not make him a bad actor, rather the contrary. In fact, such actors are versatile, and they can play anything. Usually after the first successful role that was seen by critics on the actor mark appears. Because of this, directors often see actors in those characters that made them famous.

Yes I do flickshtain that is why we must keep a good eye on him.

Do not take it personally. I was not talking just to you. However, Robert Knepper – not a novice. His talent is quite inconclusive in many movies.

U should have seen Robert in 1987’s “Wild Thing” – I still have that movie in my collection.

Him & Kate Quinlan had a chance to meet in SGU, too ;)