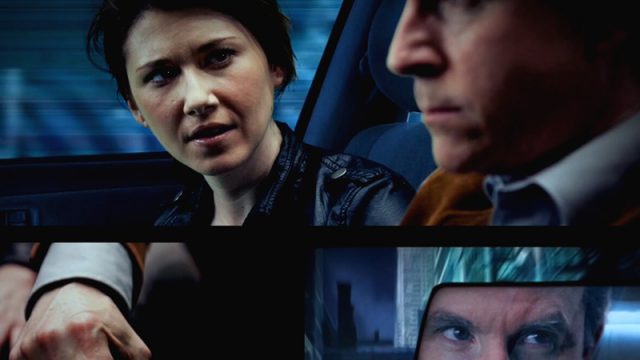 Former cast members of Stargate Atlantis have reunited for a new 3D Web comic series, State of Syn. The show premiered in November, and the first two episodes are available now.

Jewel Staite (SGA‘s “Jennifer Keller”) stars as Annika Drake, a “synesthetic” born with the innate ability to see patterns and hack technology. In this futuristic world Annika and her friends are pulled into a mystery surrounding her father’s tech company, Psylo5ense, which is taken over by her father’s former business partner.

That’s none other than David Hewlett (SGA‘s “Rodney McKay”), who plays Aslin Kane. Also co-starring is Rainbow Francks (“Aiden Ford”) as a preacher with his finger on the pulse of the public.

The unique look of the Web comic combines traditional illustration and Flash animation with live-action photography, while the actors also provide voice-over work for their characters. Once complete, the series will be comprised of ten 5-minute webisodes.

State of Syn was created by Daniel Dales and Jarrett Sherman, and directed by Jed Weintrob.

I am intrigued. This is relevant to my interests, and I’m glad they are working together again. Unfortunately it’s hard for me to watch since I really don’t care for this motion comic style. I never have. I don’t know why. I might give it another try when all 5 episodes have been released. Until then I’m just glad that they are working together again and enjoying themselves.

Very disappointed that most of my favorites from the series (Joe, Rachel, Jason, David N or Paul) aren’t involved in this. I had my hopes up when I saw the title. Some reunion.

So basically it’s McKay… and the characters most people couldn’t stand. OK.