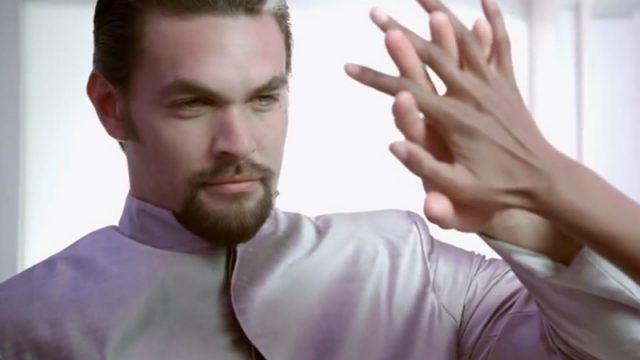 David Hewlett’s sci-fi thriller is almost here, and it will be in the U.K. first. Debug will see distribution in the United Kingdom in November — and now you can watch a 3-minute preview of what looks to be a very cool project.

Jason Momoa (Stargate‘s Ronon Dex) stars in the film, about a group of computer hackers sent to work on a derelict space ship — where they discover a vengeful artificial intelligence that would kill to be human. “As the fractious team is forced to match wits with this rogue program,” says a press release, “they discover that the ship holds a deadly secret, and a fate far worse than death.”

Hewlett (Stargate‘s Rodney McKay) wrote and directed the film, which shot in Toronto early last year. It is his third feature behind the camera, following 2007’s A Dog’s Breakfast and 2011’s Syfy movie Rage of the Yeti.

Another Stargate connection: Filming reportedly made use of some of the Destiny sets from Stargate Universe, which Hewlett acquired after the show’s cancellation. And actress Kate Hewlett (Jeannie Miller) is also listed on the show’s IMDb page.

We’ll keep our ears to the ground on when the film will arrive State-side and in Canada. In the meantime, keep up with David’s doings on his YouTube channel, Fanatical, and on Twitter.

Not a big horror fan, but Jason is looking mighty fine!

Well, that was weird.

Looking forward to it, ready the popcorn.

Looks a bit weird. Hewlett, just get everyone back and do a Stargate movie or series. Don’t worry about copyright etc just change the names a bit, Ronan, Rodney McKlay. You can use Atlantis as its not copyright, call it space-gate and lets do this! :D

Interesting and very visual. I get a flashback to the last scenes of the first Alien movie with Ellen Ripley in that white tank top and knickers. A homage perhaps?