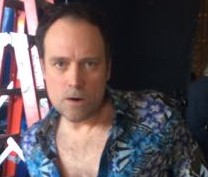 The show follows the crew of a derelict space ship who awaken from stasis with no memory of who they are or how they got on board. Hewlett (“Rodney McKay”) will play Tabor Calchek, the team’s “handler,” in a recurring role. Says Syfy:

Slick, silver-tongued, and more than a little seedy. Tabor Calchek is the team’s “handler” and the ultimate agent. For the standard 10% commission, he uses his underworld connections as a broker to secure his clients their lucrative assignments. Tabor is sly, manipulative and opportunistic, and can always be counted on to look out for his client’s best interests … right after his own.

“When it came time to cast the role of Tabor, I knew David would be perfect,” Mallozzi said. “No audition required. We went straight to offer. It’s been great working with David again.”

Mallozzi passed along to GateWorld a pair of set photos of David in his new role: 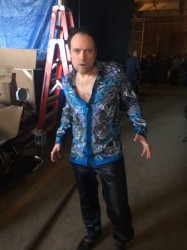 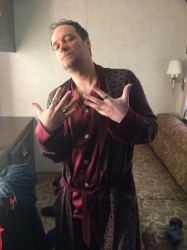 Also guest starring in Season One is Ruby Rose (Orange is the New Black) as Wendy, a “dangerously beautiful android with a full range of pleasure features.”

Season One will wrap up with even more members of the Stargate family, with director Martin Wood helming episode 11 and Andy Mikita directing the final two hours of the 13-episode season.

Keep up with all the behind-the-scenes action at Joseph Mallozzi’s blog, and watch for more Dark Matter fun at SciFi Stream in the weeks ahead!

[…] over to our sister site, GateWorld.net, for an exclusive behind-the-scenes look at the […]

Amanda Tapping directed an episode too.

So looking forward to seeing Hewlett again. No one does “swrammy” like him.

they should have kept him as the Anoying McKay, but still everyone loved him for saving there asses over and over