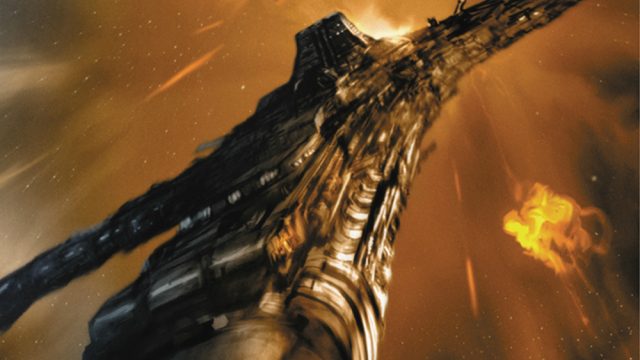 Stargate Universe is headed “Back to Destiny” when the story leaps into comic books later this month.

Indie publisher American Mythology had originally scheduled the first issue of the new SGU comic book, subtitled “Back to Destiny,” for May of this year. Our local comic book shop confirms that the issue is now scheduled for the third week of June in the U.S.

The new stories pick up where the television series left off and are meant to be a sort of “SGU Season Three.” (They are under official license from MGM, but the TV show’s creators and writers are not involved.) While Eli races against time to repair his damaged stasis pod, a new danger to the ship threatens the fragile plan meant to keep everyone alive.

Mark L. Haynes & J.C. Vaughn are writing “Back to Destiny,” with Giancarlo Caracuzzo providing the art.

The SGU expansion comes one year after American Mythology’s debut of the new Stargate Atlantis comics. The 3-issue “Back to Pegasus” story debuted in May 2016, followed by “Gateways” (three issues) and now “Hearts & Minds.”

Issue #1 of that story is now in stores. The storylines are continuous, with the Ancient scientist Janus playing a major role. 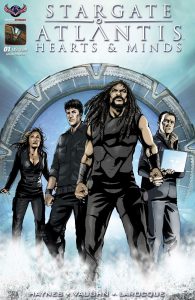 The Stargate comics come with a cover price of $3.99 and are available in comic stores nationwide. Digital issues are also for sale at Amazon (for Kindle devices) and Comixology.com.

Collectors will want to look for the main cover (labeled as such right under the price) and also a number of alternate covers for each issue, which include both original art and cast photography from the SGA and SGU television runs.

The Stargate franchise’s previous comic book runs include a 4-year run for Avatar Press, which published SG-1 comics and concluded with a brief Atlantis story in 2006 and 2007. Dynamite then picked up the license from MGM and published “Vala Mal Doran” and “Daniel Jackson” titles in 2010 (a total of nine issues).

Keep up with the full run of the Stargate Atlantis and SGU comic books in GateWorld’s updated and expanded Comics section!

I find the Stargate continuation stories very hit and miss

I’m inclined to groan at this, but to be fair I haven’t checked out the Atlantis comic series at all so I don’t know if it’s any good. The fact that it’s noncanon is a huge turn-off in and of itself. I have read one of the Dynamite-published books, however. The Vala Mal Doran graphic novel. That was the most laughably bad licensed material I’ve ever read. The writer had clearly never even watched the show before. Bits of it were fun to read through, but it was so far removed from being anything like the universe of Stargate, that… Read more »

[…] fate of Eli will be resolved in a new Stargate Universe comic from American Mythology. It's described as a sort of third season where "Eli races against time to repair his damaged stasis pod, [and] a new […]

[…] GateWorld, American Mythology’s new Stargate Universe comic will pick up where the TV series left off, […]

[…] Remember Stargate Universe? It was on the SyFy channel for two seasons from 2009 to 2011. Though it wasn’t as popular as its predecessors Stargate SG-1, which ran for ten seasons, and the five seasons of Stargate Atlantis, the show managed to continue the tradition of human exploration of distant parts of the galaxy or other galaxies via the Stargate: the device invented by the Ancients that created a wormhole for near-instantaneous travel between gates to other parts of the galaxy and even to other galaxies.   However, this time it was the success of the Icarus Project to unlock… Read more »

I’d feel better about these comic adaptions if Joe Mallozzi and Paul Mullie were involved. I don’t know why these publishers don’t approach them about creating Stargate comics.