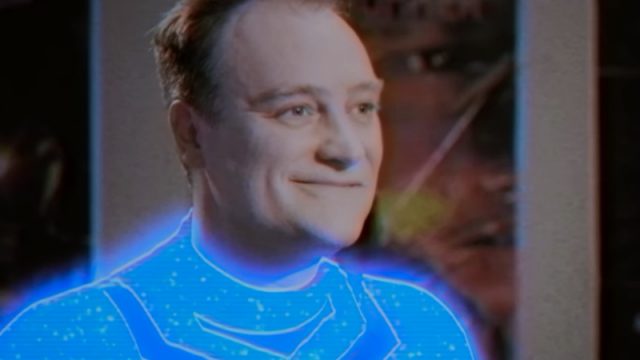 Stargate Atlantis‘s David Hewlett is at it again, starring in a weird and wonderful comedy short film for producer Red Giant. What do you get when a lightning strike brings a holographic Hewlett to life?

Written and directed by Aharon Rabinowitz, Hewlogram spoofs 1980s culture and in particular the short-lived, 1983 TV show Automan. (That show was created by Battlestar Galactica mastermind Glen A. Larson.) Automan star Chuck Wagner even makes a cameo in the film.

When all is said and done, Hewlogram looks like a trailer for the greatest science fiction Saturday-night talking-car buddy-cop TV show of all time. (There might even be a Stargate tucked away somewhere.)

The full film runs a little over 5 minutes:

To make matters worse, Red Giant has also released a behind-the-scenes video featuring Hewlett in all his blue leotard goodness.

“The Making of Hewlogram” runs 14 minutes, featuring Rabinowitz walking through the production from concept, to locations, to props, to sound and score, to the ins and outs of Hewlogram‘s visual effects work. Check it out:

Ha! Okay, that was good. David Hewlett gets typecast a wee bit, but man, he’s good at what he does.