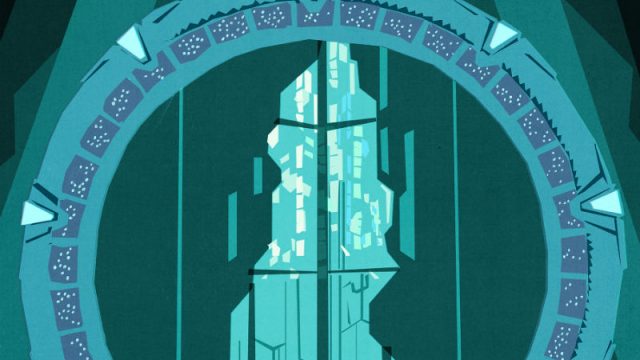 Since GateWorld was founded in 1999 we’ve been a site made by fans, for fans — and so we’re particularly excited today to kick off a brand new part of the site: the Stargate Fan Art Gallery!

“My first encounter with Stargate was a long long time ago, when my mother let me watch the original film when it was first shown on TV on a very old version of Sky,” Andrew said. “A while later we heard about a TV series starting and were hooked after the first episode. We went on to watch every episode together — Stargate SG-1, Stargate Atlantis, and Stargate Universe!”

Andrew said that, like all fans, he was upset when it all ended. But he was energized by the “Drive to Revive” Twitter campaign earlier this month.

“After completing this poster nine days before the planned ‘Twitter storm’ I thought it would be fun to make a new poster every day leading up to the event. In the end I made 12 posters — two more than I planned!”

The complete series features 12 images highlighting the places of Stargate SG-1, Atlantis, and SGU — including all three gate rooms, the Destiny, and several planets with significant meaning to the franchise’s history.

“The process was the easiest illustration I have done, ever,” Andrew said, “maybe because of the love I have for the franchise. Every poster was a joy to finish! To decide what planets to illustrate I rewatched my favorite episodes and thought about planets that were influential in the series.

“It wasn’t hard, to be honest. I could of picked hundreds of planets!”

Here’s a hint for enjoying Andrew’s art on a daily basis: The posters are just the right size to work as a home screen background on your mobile phone.

Watch as a Slideshow!

Andrew will also curate the new Fan Art Gallery, which will spotlight some of our favorite fan-made visuals of many different styles and subjects. He hopes to exhibit the creativity of an active community of artists, who are both creating new work and showing off their old favorites.

Want to get involved? If you are an artist and you’d like to showcase your work on GateWorld, send us some samples and we’ll pass them on to Andrew! You can also find him on Twitter at @AndoryuuRuushii and on Instagram at andrewcharlesarts (where you’ll find more Stargate-related illustrations).