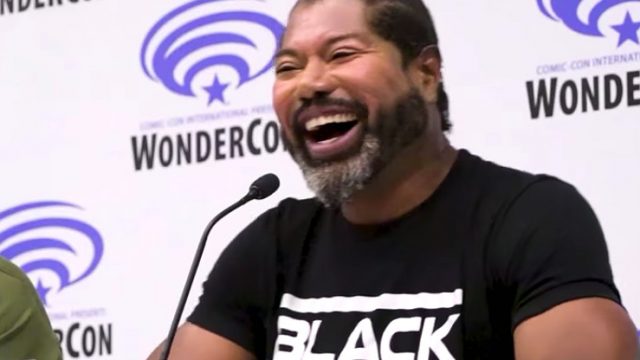 Christopher Judge has stated his desire to tell an Origins story of the Free Jaffa. Will it happen?

From his look to his voice to his hair (or lack thereof), Teal’c’s evolution as an iconic science fiction character was a true journey. So says actor Christopher Judge, who is currently working as a sort of “Stargate ambassador” with the official Web site Stargate Command.

Judge co-hosts the video interview series “Dialing Home.” He’s also just smashed into the video game world in his leading as Kratos in the new God of War (which just hit the shelves on Friday).

Now Stargate Command has posted the full video of Christopher Judge’s panel appearance at WonderCon, held in Anaheim, California at the end of March. Check it out below!

Judge talks about his casting on the series, the cast’s introduction to Bra’tac (and actor Tony Amendola), fleshing out the character of Teal’c and the Jaffa as a whole, on-set pranks, early challenges with make-up — and hair! — and much more.

The full panel runs about 42 minutes.

can you imagine how unhappy apophis w/ teal’c’s hair now?

What’s the time code on the question, RamblerReb?

The sound quality is atrocious. They sound like they’re in a bucket.