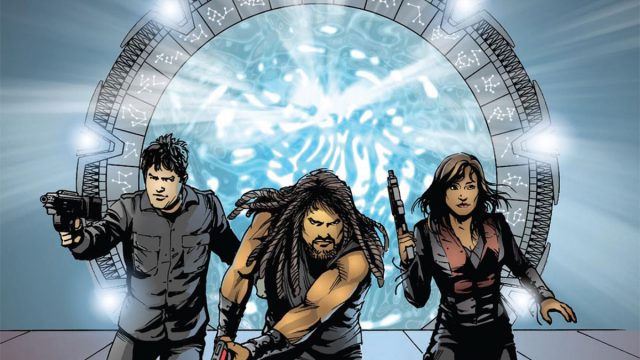 The newest issue of the Stargate Atlantis comic book hit the shelves today: “Singluarity” Issue #2 is now available digitally and at your local comic book shop from publisher American Mythology.

“Singularity” is a three-issue series that concludes the ongoing story arc that started with 2016’s “Back to Pegasus.” The Atlantis team’s primary adversary is the ancient scientist Janus, who has raised a powerful army and won the hearts and minds of planets in the Pegasus Galaxy — all in pursuit of his own agenda.

Pick up the digital comic now from Amazon / comiXology.

In the penultimate issue of Stargate Atlantis Singularity, the Atlantis team is faced with the final agenda of the rogue Ancient, Janus. His machinations over time have led to the galaxy teetering on the brink of destruction and only the intrepid Atlantis crew stands between him and his ultimate conquest. This arc ties all of the Stargate Atlantis issues to date together and delivers a powerful tale of revenge and desperation.

Mark L. Haynes and J. C. Vaughn wrote the issue, with art by Gordon Purcell and the main cover illustration by Mark Wheatley.

Head over to GateWorld’s complete Comics section for more on the series from American Mythology!