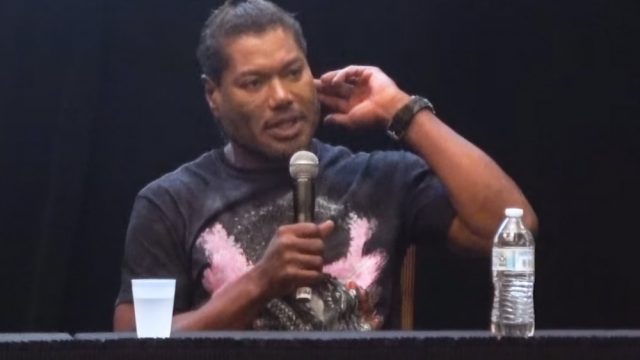 Stargate’s Christopher Judge has always been a fan-favorite, playing Teal’c on all ten seasons of Stargate SG-1. In addition to his ongoing acting and voice work, today he’s also a sort of “brand ambassador” for Stargate and MGM’s digital platform, Stargate Command.

This past weekend Judge appeared on stage at the ComiCONN pop culture expo in Mashantucket, Connecticut. Today fans can watch the entire panel, courtesy of Fandom Spotlite. Take a look below!

Judge talks about the intensive casting process for the video game God of War, and the game’s success. He also discusses working with director Christopher Nolan on The Dark Knight Rises (in which he was originally going to have a larger role as part of Bane’s crew), shaving (and growing) his hair on SG-1, and the on-set atmosphere during the filming of the show’s two-hundredth episode. (The Stargate-related talk starts around 30:00.)

The entire panel video runs a little over 45 minutes.

Judge will also headline the Stargate panel this month at San Diego Comic-Con, set for Thursday, July 19 (12 noon P/T) in Room 7AB. When asked if there will be new Stargate in the future, Judge coyly referenced the upcoming panel … and text message he’d received instructing him to say nothing other than that!