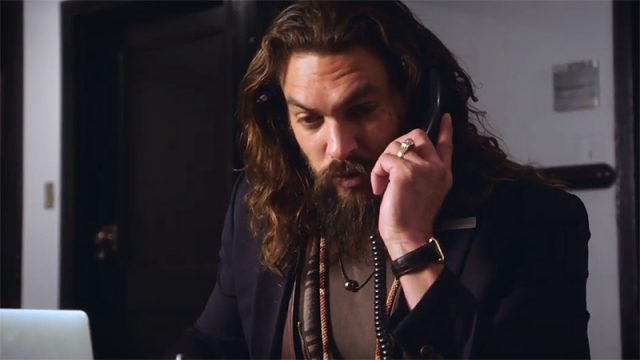 SNL has just released the first teaser promo for the show, which sees Jason conscripted to work as an NBC page. But how will he fare when he receives a vital assignment?

Momoa has also been posting behind-the-scenes videos on his Instagram account, including his awe-struck arrival at the legendary studio that has hosted SNL since its premiere in 1975. Jason’s era growing up was when the show featured the likes of Chris Farley and Adam Sandler:

You are OFFICIALLY in my DREAMS The greatest moment in my career is about to go down this week. @nbcsnl I’m here. I’m not leaving #homesweethome #mygods #mylegends SNL aloha J

EVERYONE WATCH SNL THIS SATURDAY #DROGOISCOMING

The chance to host the show in 2018 comes as part of the promotional tour for Momoa’s starring role in his own big-budget superhero movie. Aquaman, directed by James Wan, arrives in theaters December 21.

He seems like a good guy and was heroic in Atlantis. I wish him well.