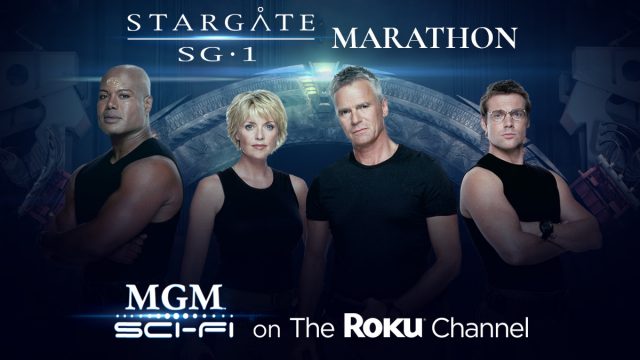 A two-day marathon of some of Stargate SG-1‘s best episodes is coming to Roku this weekend, May 2 and 3.

MGM has announced that The Roku Channel will stream 48 hours of fan-favorite episodes from the series, which starred Richard Dean Anderson as Colonel Jack O’Neill.

Roku’s free, on-demand video streaming service is available online and via the more than 40 million compatible devices in U.S. homes. (The company reported 39.8 million active accounts as of the end of March.)

From what we can tell, though, fans should not need to own a Roku device to enjoy the marathon. The Roku Channel streaming service offers a wide range of TV and films available on the Web site without a Roku device — and, in some cases, even without logging in to a free account. (The service also offers paid add-ons for premium channels.)

The Roku Channel also launched in Canada in 2019 and in the U.K. just last month — so hopefully the marathon will be available on both sides of the pond. The service touts no subscriptions, fees or logins required to access content.

While we don’t know which episodes will be included in the marathon just yet, MGM does say that it will feature fan favorites from all ten seasons of the show.

Do you plan to watch this weekend’s marathon? Keep up with all the detailed story analysis each episode with GateWorld’s SG-1 episode guide!

I have all the DVDs and active subscriptions to Hulu and Amazon Prime which each have all the episodes for all three series. So I probably won’t bother with an ad supported showing.

Just so you know, the show doesn’t just stop with the marathon weekend. MGM Sci Fi on Roku is also showing SG-1 episodes weekday mornings and evenings, SGA weekday evenings, and SGU on Saturday afternoon, from what I’ve seen. I haven’t been able to find a schedule.