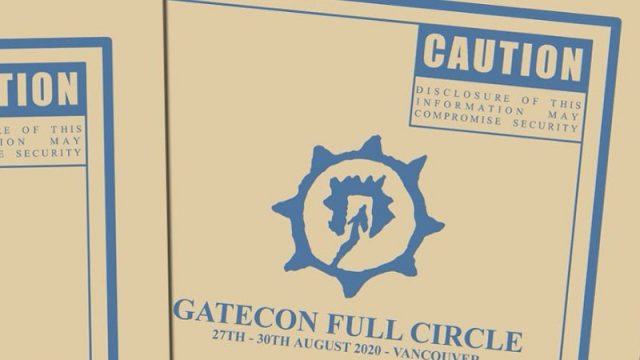 The longest-running Stargate fan convention is going worldwide with its 2020 celebration. Although this month’s gathering of Gatecon: Full Circle in Vancouver was cancelled due to the pandemic, Gatecon organizers have announced a series of online events that will take place throughout this weekend – and the coming year.

It starts this Friday, and it’s entirely free worldwide.

This year Gatecon is celebrating the twentieth anniversary of the entirely fan-run, not-for-profit convention with a virtual “Full Circle” weekend of streaming video events. The “GateconVersations” will be pre-recorded due to time zone constraints (organizers and participants are spread from Australia to the U.K. to North America), with a live text chat when the events premiere on Gatecon’s YouTube channel. It all leads up to a Zoom reunion of Stargate cast and crew members on Monday (with a mystery guest list). 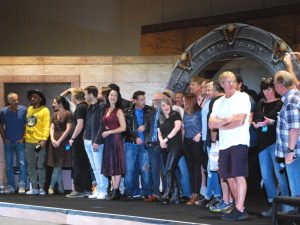 Gatecon held its very first event in 2000, during the production of Stargate SG-1‘s fourth season. Over the years it has become a fixture for the city of Vancouver, with regular attendees and actors alike describing Gatecon as a family.

“It’s sometimes difficult to believe we’ve been staging these events for Stargate fans for two decades, but it’s also hard to remember what life was like without these amazing gatherings of friends and family,” Gatecon organizer Richard Pasco said. “Safe to say we are all having hug withdrawal this year!”

Co-organizers Fryn, Ian, and Stef Rogers added: “Over the past 20 years so much has changed, be that for each of us personally or for the world as a whole. What hasn’t changed, though, is the family atmosphere that’s always present at Gatecon. Here’s to 2021!”

Here’s the schedule for this weekend, culminating in Monday’s Stargate Zoom reunion:

9:00 a.m. (PT) – Gatecon Opening Ceremony. Being shown for the first time ever outside the convention hall is the intro video for the 2016 Gatecon: Homecoming event, “Absolutely Everybody.”

9:15 a.m. (PT) – Go back in time to watch the first 15 minutes of the 2003 convention video — including set-up, attendees arriving, and the “Absolutely Everybody” intro video from that year. (It’s becoming something of a theme song for the show’s opening ceremonies.)

9:00 a.m. (PT) – Go all the way back to the beginning with “Absolutely Everybody” kicking off the very first Gatecon event in 2000!

12:00 p.m. (PT) – The Gatecon Stargate Cast Reunion! Gatecon has invited as many Stargate cast and crew as possible to join in a special Zoom reunion. (This will be recorded on Sunday and premiere Monday on YouTube.)

Head over to YouTube and subscribe to Gatecon’s channel to get ready to participate! You can enable alerts to be notified when each event goes live, and pop into the chat to say hello.

The in-person “Full Circle” convention was originally scheduled for this weekend in Vancouver. It’s now been reset for August 26-29, 2021. Tickets are on sale now.

Meanwhile stick with GateWorld for our rolling coverage of Gatecon’s online events throughout 2020 and 2021!