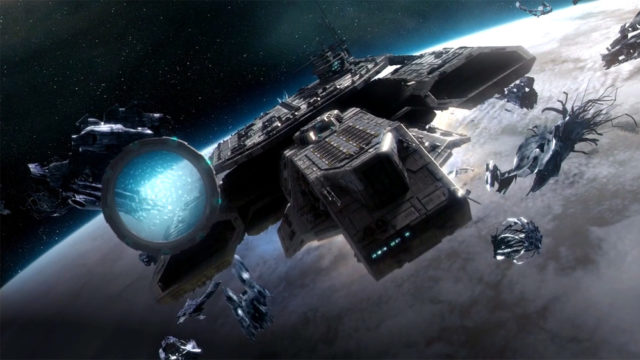 It’s the news that Stargate fans and model enthusiasts have been waiting years to hear: the Stargate franchise is finally getting a line of officially licensed model ships.

Eaglemoss Lt.d will produce a series of ships from the Stargate universe in its Hero Collector series under license from MGM, the company announced today. The first ships in the die-cast line will be released late in 2021 or in early 2022.

The announcement came from brand managers Chris Thompson and Ben Robinson at the end of the company’s online presentation today at New York Comic Con. (Watch it below.) Robinson indicated that the models will be produced with reference to the original visual effects files from the shows’ production. Stargate SG-1, Stargate Atlantis, and Stargate Universe were in production from 1997 to 2010.

“We’ve been in touch not just with the licensor but with the production team, and we’ve managed to track down the original VFX models,” Robinson said. “VFX has moved on a little bit since some of them were made for the show — so we’re upgrading them at the moment.”

“I’m really glad that we’re able to expand what we do, literally, into new universes,” he added. 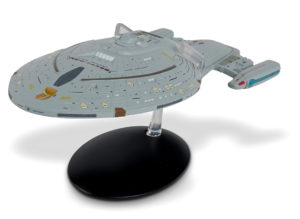 We don’t yet know just which ships from the Stargate universe will be produced first, or what scale they will come in. Among Eaglemoss’s collection is a line of science fiction ships that are die-cast and hand-painted. These are around 9 centimeters (3.5 inches) in length, and are sold around the $30 price point. A larger “XL” set of die-cast Star Trek ships is around 25 centimeters (10 inches).

Robinson said on Twitter that the license covers the whole TV franchise.

The Star Trek starships collection today includes well over 40 models. The line also features a printed collector’s magazine with color artwork, technical specifications, and more. The publisher utilizes the “partwork” subscription model popular in the U.K., where customers can subscribe to receive a new piece and companion magazine each month.

Just some of the starships in Eaglemoss’s Star Trek collection. Imagine an array of Goa’uld, Asgard, Ancient, and human ships in your collection!

In addition to the latest from Eaglemoss’s existing licenses for Star Trek, Doctor Who, Battlestar Galactica, Marvel, Alien, The Orville, and the classic Space: 1999, the company also announced that it will produce ship models from Amazon’s hit science fiction drama The Expanse.

We’ll continue to bring you the latest news on the Stargate ship models as we hear it! Meanwhile take a look at some examples of the company’s recent work at Eaglemoss’s online shop and at HeroCollector.com.

Are you excited about collecting the ships of Stargate? Which ships do you want to see first? Give us your top 3 picks in the comments below!

Probably most of the fans would like to have – Jumper – Prometheus – Daedalus – Ha’tak – Tel’tac – Atlantis – Wraith dart – Wraith hive – Destiny – Ori mothership But these were most special and unique ships in the SG franchise : – RepliCarter’s ship – Thor’s chariot (The Biliskner) – O’Neill (the new Asgard ship) – “Grace” alien ship – Ra’s ship from the Stargate movie (Kheops ship) – Ori mothership – gate seeder ship – Apophis’ supership – Anubis’ flagship – F302 So I believe the most popular fan choices would be the jumper, the… Read more »

I am actually a fan of Ancient ships… like Orion(aka Aurora class) or Atlantis or Destiny. Would love to see Daedalus and Prometheus as well.

Also, I know it’s not a ship, but I’d love it if they could include the Stargate itself. (I cannot find a good quality replica of that anywhere.) They could even release one for each show!

There are about 180 issues of the Star Trek starships collection.

I’ve got about 20-30 of the star trek ones. It got too expensive after awhile but I may have to bite on this.

My top 3 would be. Daedulus. Destiny. Ha’tak

can’t wait to see the collection !

Ah darn…when read the title I thought it was for model kits. Too bad it’s ‘collectibles’

put me in the poor house

We’ve been in regular touch with Eaglemoss and it sounds like they are close to an initial announcement. I’m hoping we can bring you some more news in July!

Sorry for the bother once again, did they announce any update ?

I’m super pumped about this news!!! Day 1 purchases for me! haha