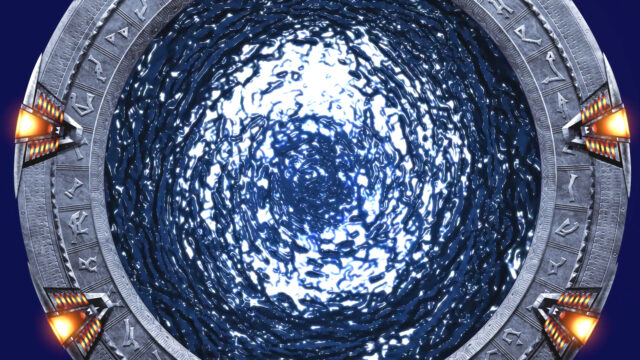 UPDATE: The Stargate Channel is now streaming on Pluto TV at channel 152 (and on demand) in the United States. Despite the company’s announcement of only certain seasons, the three series launched with all 17 seasons available.

Thus far we have only confirmed that the Stargate Channel is available in the U.S. We have reached out to Pluto TV for comment on whether the shows and movies are restricted to this region.

There’s a brand new way to watch Stargate starting this Friday. Pluto TV is giving Stargate its own 24/7 dedicated channel, beginning on April 1, 2022.

The Stargate Channel will stream the original “Stargate” feature film, the two SG-1 movies, plus selected seasons from the three live-action television shows.

Pluto TV is an Internet television service available in 25 countries, including the U.S., Canada, the U.K., and throughout Europe and Latin America. Because shows here run continuously on the hour (rather than on demand) the service hearkens back to the old channel-surfing days. The service is entirely ad-supported, so expect commercials — meaning Pluto is available for free in select countries, and without the need to create and manage an account before accessing the full array of classic shows and movies.

Starting April 1, 2022, the Stargate Channel will be continuously streaming:

By our count that’s 196 hours of Stargate at launch, covering more than half of the 375-hour franchise. To watch it all you’ll need to load up on caffeine and snacks and binge for a little over 8 days straight. 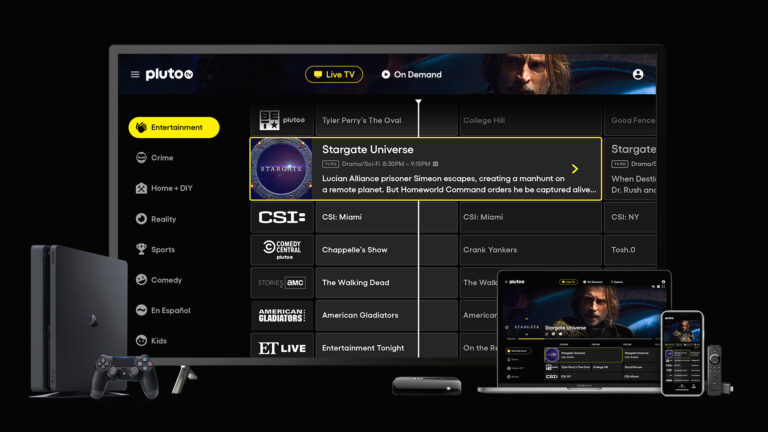 Pluto TV hasn’t said what order they’ll be running things in. But most shows and movies also look to be available in the On Demand section if you are in the mood for something specific.

Along with channels dedicated to a genre (like science fiction) or an era (like “80s Rewind”), the Stargate Channel joins other franchise-specific channels running 24/7 on Pluto TV — including Star Trek, classic Doctor Who, CSI, Beverly Hills: 90210, and more.

Pluto TV launched in 2013 and was acquired by Viacom in 2019. The Internet television service boasts 50 million global viewers and more than 150,000 hours of content.

Ad-supported episodes stream continuously throughout the day, so check the Pluto schedule to see when a particular episode will be coming up next — or just call it up in the On Demand section. Look for the Pluto TV app for your smart TV or mobile device, via Verizon FiOS, Cox, on Xbox and Playstation consoles, or find the service online for free at Pluto.TV.

Thanks to John Callaham and Linda for the tip!

Pluto TV is currently available in the following countries (from an article posted makeusof.com on march 3rd, 2022): USA, UK, Austria, Canada, Germany & Switzerland. Access to content varies per region so this dedicated channel might not be available to everyone (possibly like Netflix it’s US only).

I found that list, but despite the date showing it is recently updated this list of countries seems years out of date. Pluto’s PR materials say 25 countries.

Let’s hope the Stargate licensing will make it available in ALL those countries where Pluto has a presence.

Indeed found another who had France and Brazil too so a little longer than what is stated there… but 25 countries is still… err… limited. =P Nevertheless, a good way to familiarize oneself, or get re-aquainted with the material.

I’d be happier about this if Pluto wasn’t such a crappy platform. Their website is a mess, you can’t search or find anything easily, and they have no shows that aren’t missing episodes. Comet TV was so much better – although their stream was crap too. Better than nothing, I suppose but I’ll stick to Netflix. I am curious which version of the COTG they’ll be showing though, any bets? lol

I’m going with the syndication cut.

Maybe not,the version they first aired was the syndication cut but bizarredly, the version that’s on Pluto now appears to be the final cut. For some reason they replaced it – I wonder if Brad had something to do with that? He’s tried to lobby Netflix to replace the original version with his cut version before. Also weird is that this episode shows up on my computer but not on my tv and doesn’t seem to air at all lately when they show SG-1 on live tv. Pluto is so messy.

What a useless service.

Why would you say that?? Its great! They have soooo much to watch and its all free! If you pay for any cable or streaming service, try not having it. What would you watch?

Can’t we just get Stargate to a world wide streaming service? I can get star trek and Battlestar Galactica where I live (Nordic countries), but no Stargate, because apparently that only broadcast on Amazon prime USA? Get Stargate to Hbo or Netflix please!

Stargate and MacGyver. Those two things is allI want. Thank you.

P.s. in regards to the article above; why only show half the amount seasons for each series? That’s just annoying.

I saw a tweet by Mallozzi where he assumed that it has to do with ownership of the show at the time of those seasons. Season 1 through 5 of SG-1 for example was owned by Showtime, the latter seasons by Syfy. He assumes broadcast contracts and the likes have a thing or two to do with it.

Sidenote: the stargate channel on Pluto is only available to the USA so the rest of the world will still be glad to have their DVD’s at the ready.

In UK I got sg1 1-8 ,SGA 2-4, sgu 1-2 on Amazon prime MGM subscribtion. Other seasons are available only buy download

It’s 1:03 am in Pittsburg, and it’s still not working /loading ( since 12:01 am) .. they are in La though, so maybe, it will work at 3-4 am. idk. I just hope it’s not an April fools joke… i seen here its suppose to be at 1pm Eastern Time
https://consumer.press/streaming-free-stargate-movie-sg1-atlantis-stargate-universe-the-ark-of-truth-continuum/

As of 9:30AM eastern, no Stargate on Pluto yet. But I saw someone say it’d go live at 1pm eastern. Pluto is a more clunky platform, but it’s gotten smoother in the past couple of years. I’m excited for being able to just turn on the TV and watch like the pre streaming service era. I’ve seen all the episodes so many times it’s nice to be able to put on a channel and have it as background while doing something else. Hopefully it’ll bring more fans into the fold too.

What channel will stargate be on on Pluto, so far I do not find it.

They’re also showing Stargate occasionally on their Pluto Scifi channel, channel 151. The problem is they don’t have a live tv guide on their website so it’s hard to know when it’s going to be on. Right now they’re showing Atlantis, followed by an episode of SGU.

It appears every episode of all three series are on the “on-demand” section. The original version of “Stargate SG-1” pilot is on Pluto (full nudity and all) and not the updated version.

Looks like they have all eps on-demand. The app sucks to navigate. Took forever to find. Needs a search engine bad.

Disapointing that a partly Canadian show is only available in the US, though I know this is a legal thing.

Pluto TV is the best!! Not great if you need to sleep tho! Ha! Every time they add another channel for one of my favorite shows, I can’t sleep! Star Trek TNG, This Old House, Tiny House Nation, Dark Shadows, CSI, old classics, old showsnfrom the 60’s and 70’s, and just when I was wishing they had Star Gate, they added it!! I have all the dvds, but its great I can watch it so easily on my Kindles. Ive watched all the movies many times, first was filmed in Yuma AZ sand dunes. I love the first two series… Read more »

I’m with Shelly on this one. Pluto is crappy. I been to 4 different web pages trying to figure out what time and day it actually starts but still have no clue.

Too many commercials to make the series enjoyable.