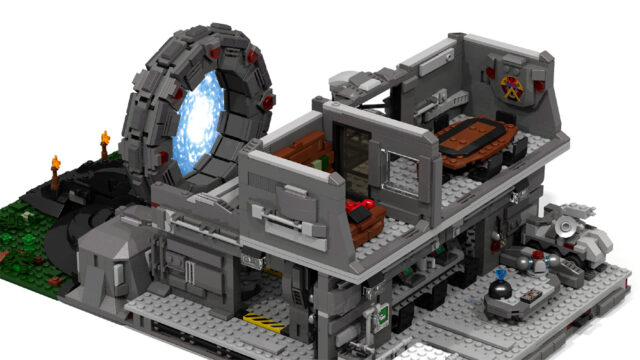 From the Editor: We are happy to present this special guest post highlighting an awesome fan-made Stargate project! If you want to see more stuff like this, post a comment below and tell us what you think. There are also several other LEGO Stargate projects out there, which we’re also working to highlight soon.

Do you have your own fan-made Stargate project or artwork you want to showcase on GateWorld? Drop us a line and let us know!

This is the LEGO Stargate Command project, a LEGO project on its way to possibly becoming a real LEGO set! This is made possible through LEGO Ideas, a Web site run by the LEGO Group which provides a pathway for anyone to submit product ideas to potentially become real LEGO sets.

But this isn’t a solo process. We need your help to make this set a reality!

As fans of Stargate already know Stargate Command (the S.G.C.) is the central operating hub on Earth for all matters pertaining to off-world activities through the Stargate. It was seen primarily in Stargate SG-1, but was also featured in a number of Stargate Atlantis and Stargate Universe episodes. The S.G.C. is a pillar of the Stargate franchise that serves as the backdrop for some of the greatest sci-fi ever created.

The LEGO Stargate Command project reproduces the S.G.C. in a realistic and faithfully detailed fashion, all while incorporating fun design elements that emulate its appearance on screen. It’s a perfect set for both play and display, created for children and adults alike! 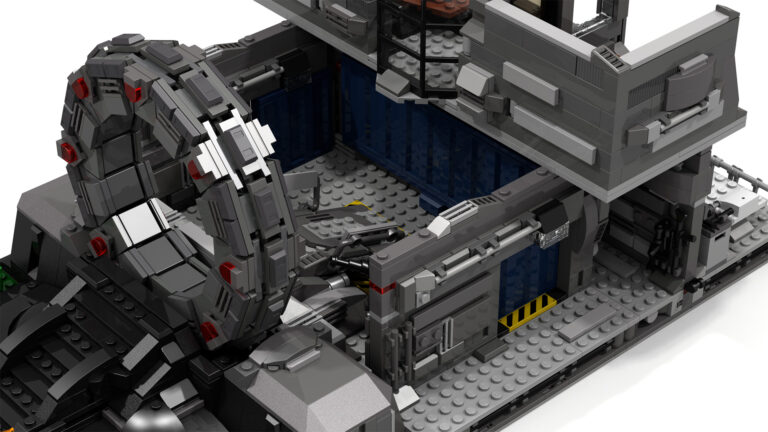 How can fan-designed projects on LEGO Ideas become real LEGO sets? In order for an idea to be considered for mass production it first has to reach 10,000 supporters. This shows the LEGO Group that there is sufficient interest in a product idea to generate revenue. That’s where people like you come in! Simply by creating a free account and clicking SUPPORT on a project, you’re helping to bring that project one step closer to becoming a real LEGO set.

Once a project reaches 10,000 supporters it will enter into a review stage. Here it will be evaluated based on playability, overall display factor, and the building techniques that were used to create the set. Many projects do not make it past the review stage if the proposed idea is similar to a set that has already been released, or sometimes due to an intellectual property (IP) conflict. (A Stargate set, of course, would have to be officially licensed by MGM.)

If a project does make it past the review stage it will undergo final design changes by official LEGO designers, in collaboration with the original project designer, before moving to the production stage — where it will be mass-produced and sold on store shelves around the globe.

Who am I? Well, I’m a fellow Stargate fan, just like you! I also happen to be a massive sci-fi fan in general, having grown up with Star Wars, Star Trek, and of course Stargate. Science fiction is special to me because it explores the depths of humanity through the lens of possible futures, while still being grounded in the reality of today. 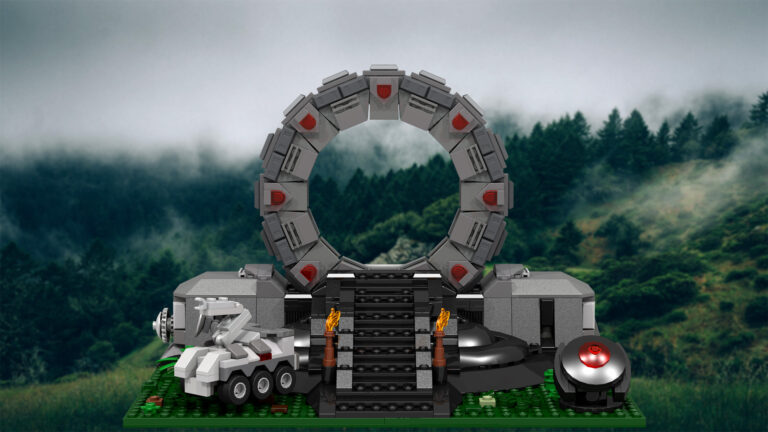 The philosophical, moral, and ethical dilemmas, as well as the action-packed nature of science fiction, all contribute lessons that we can learn from and apply to our own lives. Science fiction doesn’t always have to be set in the future, of course — but it’s the prospect of exploring humanity’s potential that makes sci-fi so endearing to me.

Along with my love of sci-fi, my love of LEGOs also began from a very young age. In fact, I’ve been building with LEGOs for as long as I can remember. I’ve always had a passion for creativity, invention, and building things. I even have an entire wall of my house dedicated to organizing all the various LEGO parts that I’ve collected over the years!

It was the fusion of these two passions that led to the creation of the LEGO Stargate Command project. When I first learned about the LEGO Ideas site I was excited by the prospect of having one of my own set ideas become a real LEGO set. So it was only natural that in an effort to combine my love of LEGO with my love of Stargate I would endeavor to create a LEGO rendition of the S.G.C.!

I have actually created two versions of the S.G.C. — the one you see today, and an earlier version designed a few years ago. When I originally found out about LEGO Ideas I immediately went about creating the S.G.C. in LEGO form, taking weeks to design the set and ensure accuracy to the show. When it was finally ready, I rendered images of the set and submitted my Stargate Command product idea to LEGO Ideas … but to my dismay, my submission was denied because Stargate was not an approved intellectual property.

It turns out the LEGO Group is quite picky when it comes to deciding which IPs they want to associate themselves with. 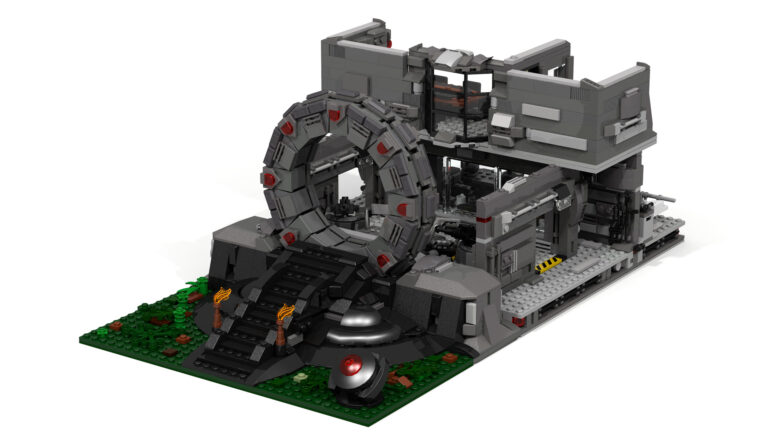 I was disappointed that I would not be able to share my project through official LEGO channels, but that didn’t stop me from sourcing my own parts and building the set for myself. This was the first rendition of the S.G.C., which was quite a bit larger than the set you see today. But it was ultimately lacking in many of the intricate details that make the new version of the S.G.C. so special.

Fast-forward to 2021, when I found out that LEGO Ideas had recently approved Stargate as an accepted IP. This meant that, for the first time, LEGO Ideas would now accept product ideas based on the Stargate franchise.

Delightfully surprised, I dusted off my old files where I had designed the original S.G.C. and went about re-designing it from the ground up, with emphasis placed on playability, intricate details, and modular capabilities so the set could be configured to display any way you want it. The goal here was to make an accurate yet affordable Stargate set that incorporates fun play elements while also serving as an epic display piece.

These are exactly the features the LEGO Ideas team looks for when they evaluate an idea for final approval. 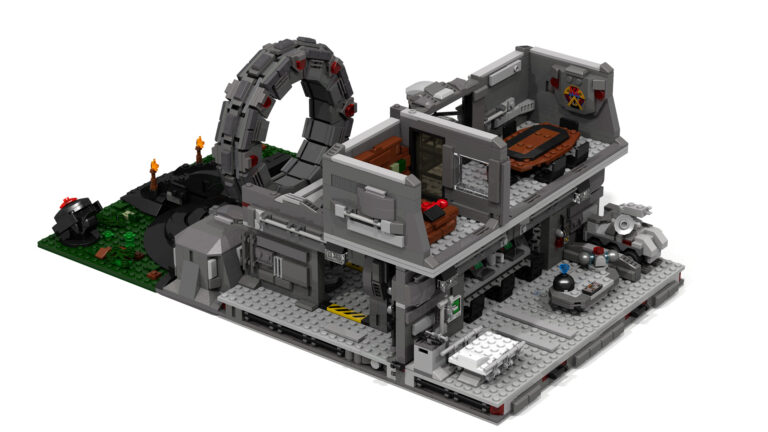 The best thing about the set is … the Stargate rotates! Yes, you read that right — simply by turning a gear on the side of the set, you can dial the gate and re-enact classic scenes from the show. I have a prototype of this built in real life and it works perfectly!

If that wasn’t exciting enough, the set has a number of other awesome features: 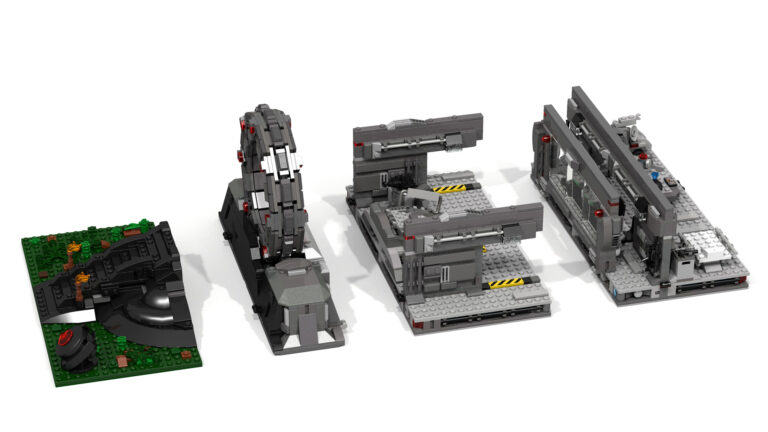 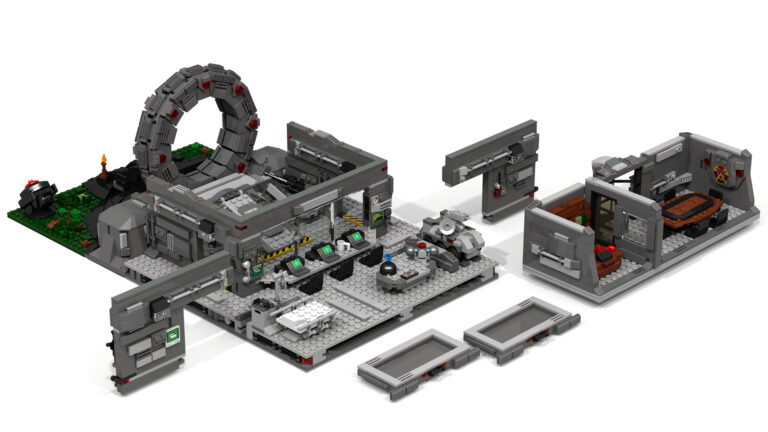 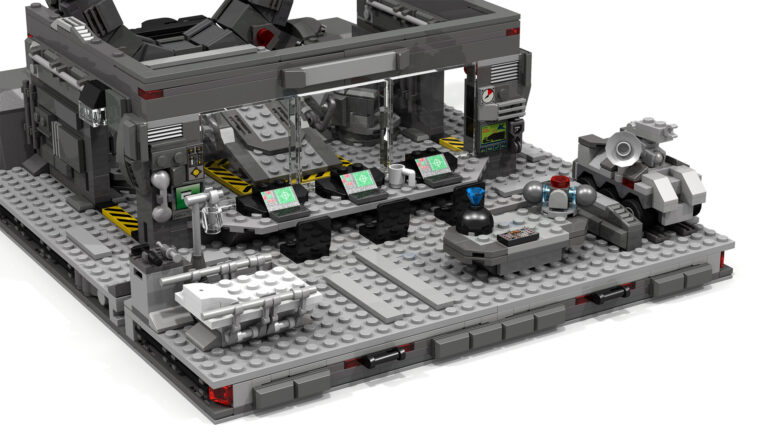 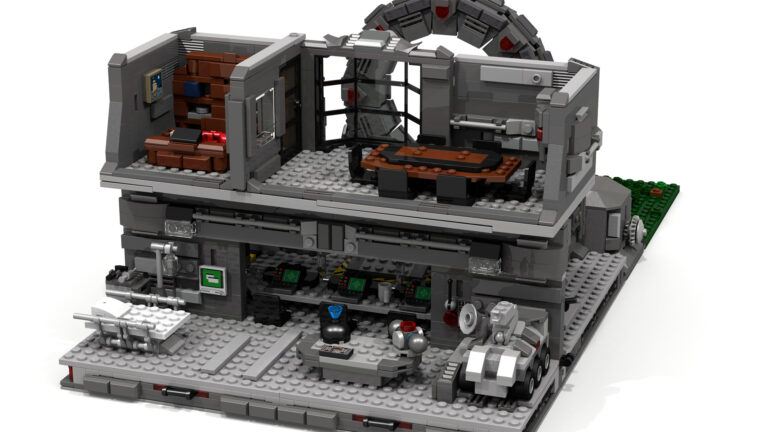 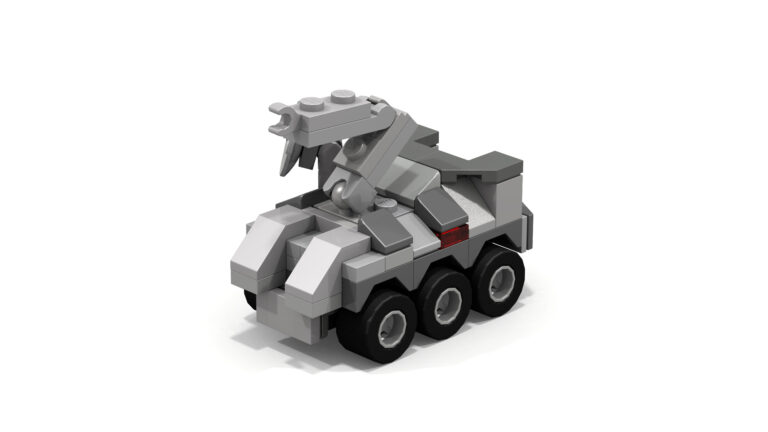 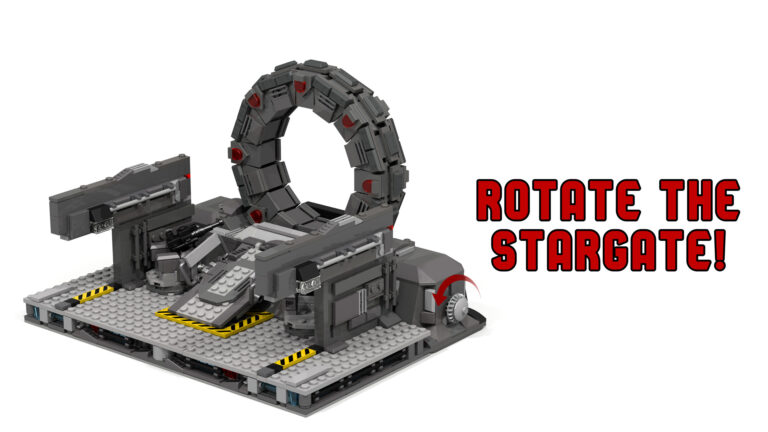 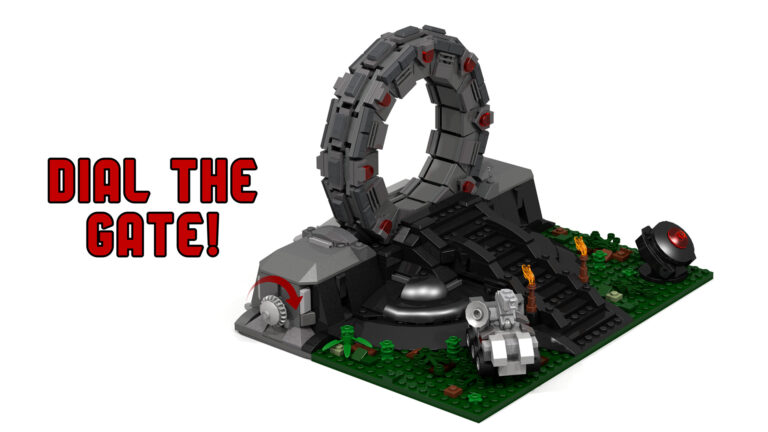 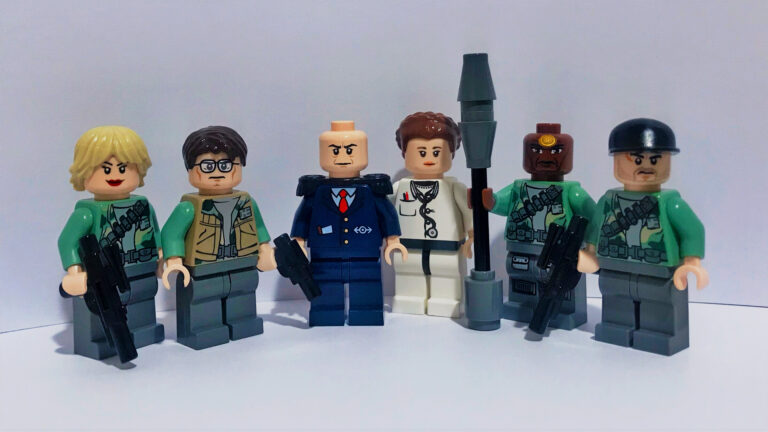 I freely admit that there are a few inaccuracies that are inherent in the design of the set, but it comes with the territory. The rooms are fairly compact and don’t fully encompass all of the features of the various rooms as seen in the real S.G.C. Many of these design decisions were made to reduce the part count of the set, while still retaining the playability factor and overall look. LEGO Ideas isn’t looking for a gigantic set that encompasses every detail; they’re looking for what makes a good LEGO set.

Additionally, the Stargate only has eight chevrons instead of nine (sorry, Destiny!). This is because, for this particular Stargate design, having any more than eight chevrons compromises the design and integrity of the Stargate. It ends up not being a perfect circle, and would not rotate properly. The best alternative is to have seven visible chevrons, which encompasses most of the dialing sequences you would want anyway. 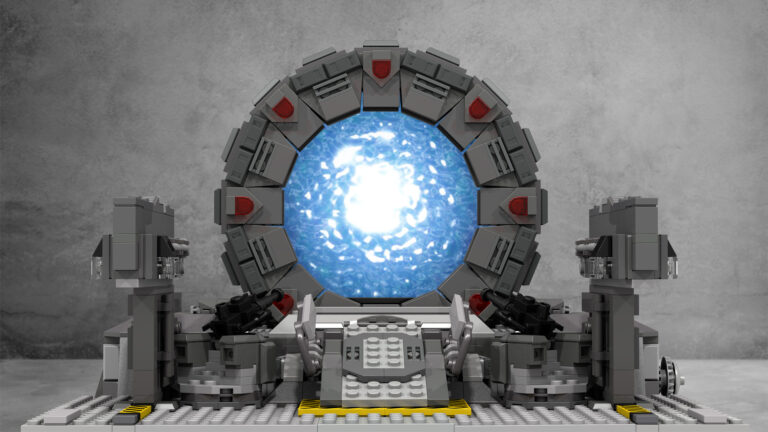 What You Can Do to Help

We can’t make it to the 10,000 supporters mark without your help! Simply by taking 30 seconds to create a free account on LEGO Ideas and clicking the SUPPORT button on the Stargate Command project page, we’ll be one step closer to making this set a reality. That’s all you need to do! It’s completely free, and only takes a moment of your time.

Beyond that, sharing the project’s URL on social media and spreading the word to friends and family are great ways to encourage others to join in and support the project. There’s only so much I can do myself to promote this project, I’m relying on you guys to help fuel the support!

I have no doubts that this project will reach 10,000 supporters. It’s a fairly easy mark to hit for a project of this caliber, especially when infused with the passion, enthusiasm, and support of Stargate fans from around the world. Today the project has more than 2,500 supporters, so we’re already a quarter of the way there!

Regardless of whether LEGO approves the Stargate Command project for set production, it will be an honor of its own to have achieved 10,000 supporters. And I am grateful to each and every one of you that helps us get there! 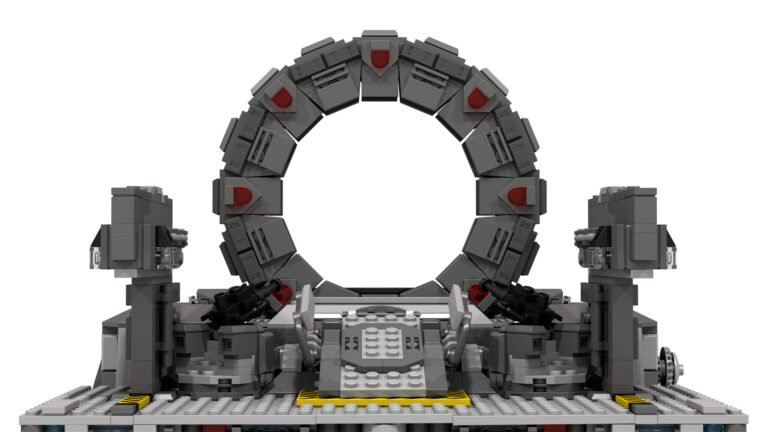 VIEW THE FULL GALLERY »
GATEWORLD is looking for new team members! If you’re a writer, artist, video creator, or have other skills to share, find out how you can share your love of Stargate (and get paid) by contributing to the site. Become a Contributor »

Eredonius is the creator of the LEGO Stargate Command project.

This is very cool. Great job. I created an account and showed my support.

So cool! I just dived into a rabbit hole of fun sci-fi stuff on that Lego site.

Rather unlikely it’ll pass into the “make stage” but one can always try. No harm in trying. However, it should be noted that Lego has a policy about (real life looking) military sets (they don’t exist) and there are several projects in different stages which revolve around the same subject. If one of them gets through, the others are automatically disqualified for being the same thing (see the rules on the website). Lego Ideas is ridiculously deceptive in as far as ideas making it. At every stage they have the final word and the power to alter an idea to… Read more »

I can’t believe this project still only has less then 4k supporter votes despite being promoted here? Can the Stargate fandom not do better than that?

Exactly! We must show that the stargate Community is here and stronger than ever ! We must vote for each of these.

So cool! And there are so many stargate project on Ideas (6). I voted for each of these. 😍😍😍