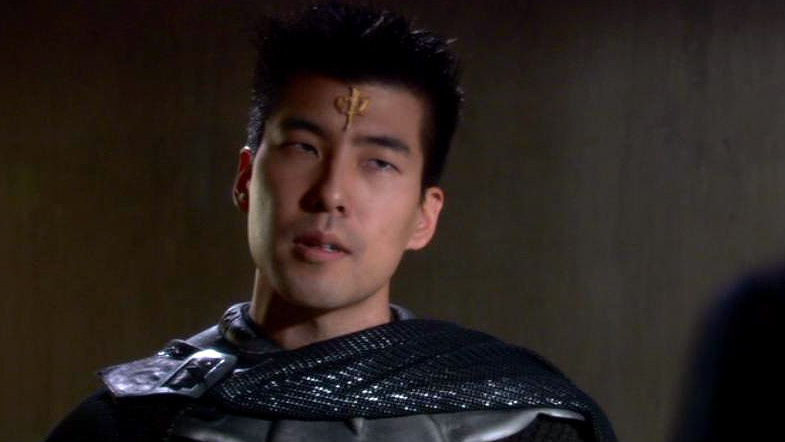 The First Prime of the System Lord Yu. Loyal to his master even when he knew that Yu's judgment had been compromised by the ravages of old age and senility, Oshu often took charge of Yu's armies when the Goa'uld needed rest within the rejuvenating sarcophagus. He was greatly concerned for the well-being of Lord Yu and his domain, and was eager to aid in the destruction of Yu's enemy Anubis.

As witness to the slow deterioration of his master, Oshu was beginning to believe that even "gods" could not live forever. He had, over time, watched Yu turn into an aged, narrow-minded and aimless leader. Oshu regarded it as his duty to protect his master, attempting to shield the truth about his condition from others and even speaking on his behalf from time to time.

Fallen - Ordered by his master to take their battle fleet to Chodawa instead of attacking Anubis at Vis Uban, Oshu is forced to confine Teal'c to a cell.
Homecoming - Oshu admits he no longer believes Yu can live forever, and is forced to take on other options to insure his master's reign. He leads Yu's forces in his name, but surrenders command of the System Lord fleet to Baal in order to destroy Anubis.
New Order, Part 1 - Oshu accompanies Yu to Earth with Camulus and Amaterasu, hoping to form an alliance against Baal.
New Order, Part 2 - Oshu warns Elizabeth Weir that she should not detain Lord Yu on Earth, and they are eventually released.
Reckoning, Part 1 - Oshua is present when Lord Yu angrily receives an emissary from Baal, and witnesses his master's murder.