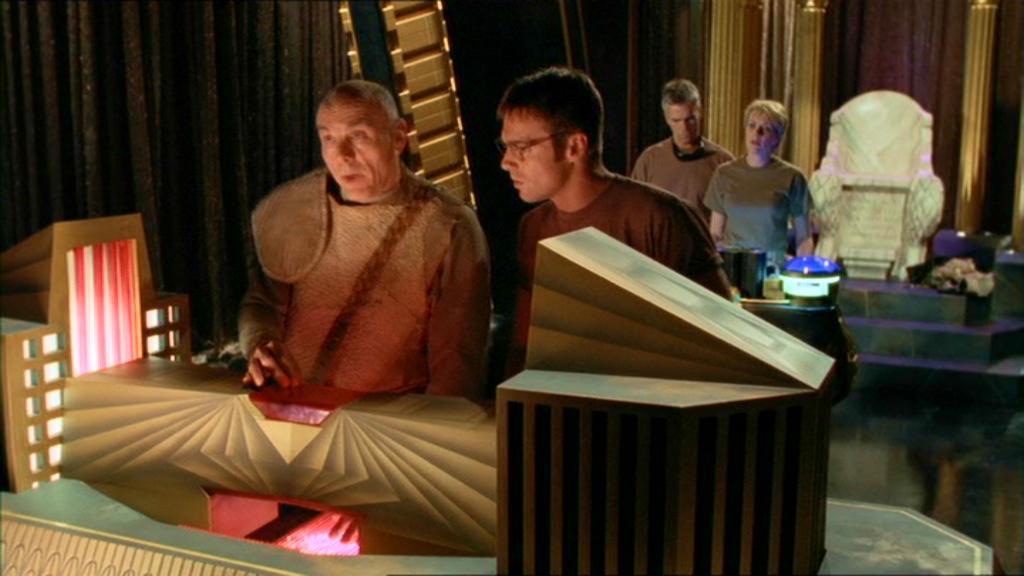 Goa'uld term for the command center of a Goa'uld mothership. The pel'tac typically has a throne for the commanding Goa'uld (or his lieutenant), a view screen, as well as piloting and weaponry controls.

There are multiple programs in the main computer allowing information to be displayed regarding internal ships systems, such as door locking mechanisms and the status of the hyperdrive engines, as well as external sensors pertaining to data on neighboring vessels and stellar phenomena.

The wide, standing console several meters in front of the throne contains piloting controls and sensor displays, allowing a single individual to pilot the ship and monitor both external and internal sensors. Two large, blue, circular controls on the pel'tac serve as the weapons firing controls.

Double Jeopardy - SG-1 commandeers Cronus' mothership and uses the controls on the pel'tac to land the vessel on its docking pyramid on Juna.
Enemies - Jacob/Selmak uses Cronus' mothership pel'tac as central command while stranded in a distant galaxy in the shadow of Apophis.
Descent - SG-1, Jacob/Selmak and several other Tau'ri use Osiris' mothership, compromised by Thor's mind, as central command in orbit of Earth, as well as after the ship crashes into the North Pacific.
Reckoning, Part 1 - Teal'c and Bra'tac command a squadron of rebel-controlled Ha'tak in seizing control of the ancient world of Dakara.