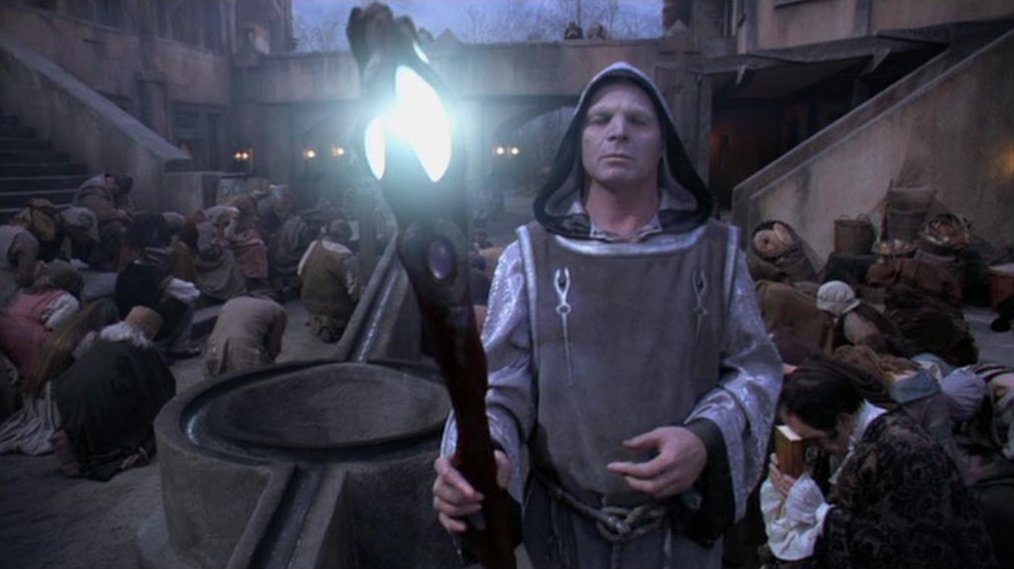 A tall device the height of an average man, wielded by Priors -- envoys of the Ori. They are adorned with the symbol of Origin. At the top is a blue crystal that glows when activated.

Prior staffs are still a mystery. Because the Priors that wield them are, in essence, hok'taurs, they themselves are capable of a great many things. The staff may serve as a simple ploy to lesser beings that the Ori are channeling miracles through the device, including resurrecting the dead, when the Prior himself may be making this happen, using the staff as but a light show while he carries out the "miracle" himself.

Avalon, Part 2 - A Prior wields his staff to bring Vala Mal Doran back from the dead.
Origin - Prior staffs are used by various envoys on Ver Eger and in the Milky Way to carry out the will of the Ori.
The Fourth Horseman, Part 2 - Gerak wields a Prior staff to eradicate the Prior plague at the S.G.C. The vaccine conceived is used to cure Earth's inflicted.
The Ark of Truth - When the Doci is exposed to energy from the Ark of Truth, his brainwashing is immediately communicated to all Priors and the people near them via their staffs.