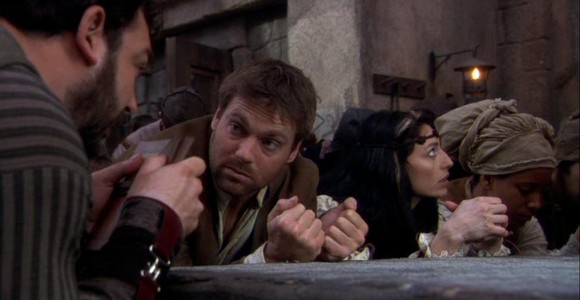 With the first attempt to solve the puzzle resulting in failure, Daniel Jackson reasons out the Ancient proverb recorded in the underground chamber: "There is only one truth: The universe is infinite." Therefore, the statement "The treasure is in this pot" must be false. He resets the pots by replacing the lids and pulls the lid of the pot of "The universe is infinite." Lifting that lid, a gold coin appears inside. The ceiling halts its collapse and begins to recede.

Daniel and Vala race to Cameron Mitchell's aid, where the Colonel tries to describe the Ancient text. Daniel recognizes one character from Mitchell's shouted description, meaning "reflect." Covering his thumb over a portion of one of the stones, Mitchell realizes it is a mirror image of the number four. In fact, the stones are the mirrored numbers one through eight. He places them in order and saves himself and Teal'c from being crushed.

The four return to the main catacomb where Mitchell finds he can now extract the sword from the stone, and a holographic knight appears to challenge him. When it strikes him he is not cut, but it still hurts, and Mitchell is almost disabled. Remembering a time when he didn't allow a physical therapist to help him during his recovery, Mitchell regains his footing and takes the knight down.

Jackson wonders if the others' presence is preventing the treasure from being revealed, so he, Teal'c, and Vala return to the Prometheus via the ring transporter. Once they disappear the catacombs begin to collapse; Vala has taken the gold coin. Mitchell quickly returns with it in hand and returns it to the pot. Replacing the sword in the stone, mounds of treasure fill the empty room!

Among the artifacts Daniel discovers a book detailing the history of the Alterans, a race that made a home called Avalon and built many "astrea porta" – the Stargates. He believes this book contains the first evidence that the Ancients did not originate in the Milky Way Galaxy, but instead came here from somewhere else entirely. Nearby, Lieutenant Marks uncovers an odd-shaped Ancient device.

Back on Dakara, Rak'nor updates Teal'c on the turmoil churning in the new Jaffa government as leaders press for control. Rak'nor is uncertain why Teal'c has chosen to spend so much time with the Tau'ri at this critical stage, but Teal'c assures him that what he is learning about the Ancients will greatly aid the new nation.

Daniel has determined the Ancient device that was discovered is a long-range communicator, and it is designed to work in conjunction with the Ancient telepathic stones recently discovered by SG-1 ("Citizen Joe"). He tries to convince General Landry that pursuit of the Ancients and their origins ought to be the S.G.C.'s highest priority from this point forward. After Dr. Lee resets the devices, Daniel and Vala each take one and insert them into slots at the base of the unit. The crystal on top begins to glow, and the two collapse into unconsciousness.

Daniel and Vala's consciousnesses are now in control of two individuals in another galaxy, a married couple named Harrid and Sallis who live in a village populated by descendants of the Alterans (the Ancients). Back on Earth, the S.G.C.'s new chief medical officer, Dr. Carolyn Lam, examines the two and determines that they are in a sleep state.

A large crowd gathers at the center of the town as a priest lights torches for Prostration, a ritual of worship to the Ori. Daniel and Vala, appearing as Harrid and Sallis, attend the services. While kneeling in prayer another member of the town tells them they must meet by the "portico of light at the hour of bly." After six hours of services they return to Harrid and Sallis's home. Vala finds a copy of the Book of Origins, the local's holy book, and inside it two communication stones like the ones they used on Earth.

The villager who spoke with Daniel and Vala at the service arrives at their home, worried and curious as to why they did not meet him. Daniel explains the situation, and the man reveals that Harrid had suspected the devices were for communication purposes. Their secret group is comprised of historians who uncovered the stones at a dig site. They have gathered evidence that proves humans predate the supposed creation of man by their gods, the Ori – and they are thus heretics. Those Alterans left behind when the Ancients migrated to our own galaxy also learned how to ascend, leaving worlds inhabited by humans, too. But unlike the Ancients, the Ori do meddle in the affairs of those mortals. Because they have powers like the Ancients, the Ori are virtually indistinguishable from gods.

Meanwhile, Teal'c returns to Dakara and learns that the fate of the new nation has already been decided (though Rak'nor voted for Teal'c by proxy). They have chosen to govern by high council rather than elected officials, with votes distributed based on military power. This arrangement has effectively made the Jaffa leader Gerak the new head of the nation.

Not long after Vala left to "take leaves" with the Administrator's wife (as Sallis would), the village administrator takes her and chains her to the sacrificial altar. A large crowd gathers to see Sallis's possessed body "cleansed." As Daniel's new friend flees he decides to go with the truth, and explains to the administrator that they are from another galaxy, using communication technology to speak through Harrid and Sallis. But their cries fall on deaf ears. Daniel tries to save Vala from the altar but is restrained by the villagers. A fuel-lit fire soon overtakes Vala and she, in Sallis's body, is burned to death.

Soon a great gust blows the flames away. At the other end of the courtyard stands a robed man with a tall staff. Everyone present bows to him except the freed Daniel, who climbs onto the altar and wraps himself around Vala / Sallis's burnt flesh. The man approaches and raises his staff, cleansing the body and clothes of all wounds. Vala has returned to life, both there and back on Earth.

Daniel thanks the mysterious, cloaked figure. "Thank the Ori," replies the man, and beckons the pair to follow him out of the village.