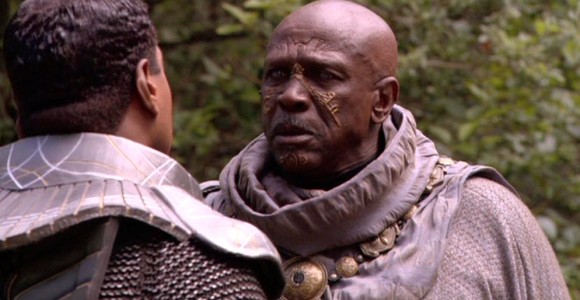 As the Ori plague spreads rapidly, SG-1 hopes that the Prior who caused the disease may hold the key to its cure. Gerak tries to rally the Jaffa to the Ori's cause, prompting Teal'c and Bra'tac to initiate a resistance.

Gerak, now a Prior, tells the Jaffa High Council of the Ori's benevolence. Teal'c reveals that the Ancient Orlin has descended and explained the true intentions of the Ori. But Gerak shuts him out by using his powers and placing copies of the Book of Origin before each member of the Council. Fearing the body was swayed, Bra'tac suggests that the few who still resist run and hide. But Teal'c has something else in mind. Amass their forces and make a stand at Chulak.

The Prior plague continues to spread across the face of Earth. Cases have now been reported in Mexico and Canada. It is only a matter of time before it becomes a world-wide epidemic.

Jolan takes Colonel Mitchell to see Lord Haikon, and in a surprise move the Sodan leader reveals that Mitchell can save the sermon – he has been turned from the ways of Origin. A mission (given to them by their local Prior) to destroy a group of nonbelievers turned sour when the Sodan discovered they were simple, innocent farmers. The honorable Haikon refused to slaughter them. Mitchell tells him that there may be a way to capture the Prior and stop him from inflicting his wrath on the Sodan.

Key information is continuing to seep through Orlin's mind. Sam presses him to teach her what she needs to know to complete the vaccine, as she can retain the information, but Orlin fears that the knowledge will be far too complicated for her. But eventually he realizes that he will likely be incapacitated before he can complete the work himself. He begins to develop notes for Sam to complete the formula on her own, if she must.

The news has worsened. China, Great Britain and Russia are no longer allowing any entrance or exit into their countries. Fearing that the cover story will soon be moot, key government officials convene at Stargate Command, but the group accomplishes little. Back on Dakara, the converted Cha'ra meets with Teal'c and Bra'tac and pledges to serve at their side.

The Prior that originally infected SG-6 returns to the Sodan homeworld to determine why they did not destroy the nonbelievers as the Ori had willed, and quickly he realizes that they are not alone. The Prior ejects Haikon and Jolan from his sight and flips Mitchell on his back, then uses his power to suspend him in the air. While his powers are focused Daniel Jackson switches through the frequencies of the inhibiting device they have designed to counteract his powers. A frequency is found, and Mitchell falls back to Earth. While the Prior is unconscious a sample of his blood is taken and returned to Earth for help in developing the antidote.

When he awakens, Daniel explains the truth of the Ori as Orlin told them, but the Prior is unwilling to listen. Despite being separated from his powers he is confident in the good will of his gods. In orbit of Chulak, Teal'c and Bra'tac's forces have made a stand against Gerak, who arrives with a dozen Ha'taks to confront them.

Orlin is continuing to make a mess of things at S.G.C., accidentally breaking several vials of Prior blood. He excuses himself from the project. As more reports of the virus pour in from new countries General Landry pays him a visit, hoping to get his help in something else.

Landry brings Orlin to the Prior on the Sodan homeworld, where the boy reveals his true name, Damaris. As soon as he had entered the Milky Way Orlin became aware of his entire identity, his wife and children that he had left behind. But the Prior is resistant, quoting scripture and parables to himself to block Orlin's words. In a weakened moment, he focuses his power to break the control of the inhibitor, pulling General Landry to him and choking him. Mitchell shoots and kills the Prior, but not before the Prior has revealed the true plans of the Ori. The ascended beings are coming to the Milky Way – to destroy the Ancients.

Teal'c hopes to peacefully resolve the conflict with Gerak, leading him to Gerak's father's grave on the surface of Chulak. There, Gerak reveals that all he wished was to preserve the lives of all Jaffa and to ensure their salvation in ascension, but Teal'c swears to him that he will either live as a free Jaffa or die by Gerak's hand.

Landry escorts all of Earth's personnel back from the Sodan homeworld, but soon discovers he has now become infected with the Prior plague. But Teal'c has managed to convince Gerak to return to Earth with him. Gerak raises his staff and cleanses the entire base of the plague. But the moment he is done his body is cast aflame. In a moment, he is incinerated. The Ori have destroyed him for his disobedience, likely setting off a built-in kill switch in any Prior who turns from them.

The death toll worldwide was nearly three thousand, but thanks to Gerak cleansing the S.G.C., an antibody was isolated and – combined with Orlin's formula – dispersed to all infected populations. Thanks to Orlin it is unlikely the Prior will be able to attack Earth the same way again. But the damage has been done to Orlin, who recalls nothing of his life as an Ancient, or as a human. The Ancients themselves will probably take measures to defend themselves from the Ori, but not before the rest of the galaxy is put at risk.

While off duty, Sam pays a visit to a young, institutionalized boy who has no recollection of her.