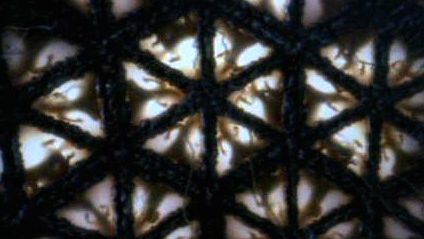 Triangular stasis chamber designed to contain a single Wraith indefinitely during the extended periods of time when Wraith feeding grounds are sparse. When the Wraith Keeper is killed, the Wraith reawaken to abandon their pods and feed on human victims.

Hibernation chambers appear to be organic, rather than technologically based, and are arranged in pairs of six along the ceilings of the central halls of a hive ship. It is unclear if these six monitor one another during the hibernation period, or if all are connected, or none. But it is interesting to note that the entire Wraith hive sleep together.

The Wraith Keeper maintains watch on the sleeping armies, possibly to monitor and maintain nourishment to those asleep. A small division of Wraith warriors patrol the corridors, protecting her and the hive.

Rising, Part 2 - After Sheppard kills the Keeper, Wraith from accross the galaxy reawaken from their hibernation pods.