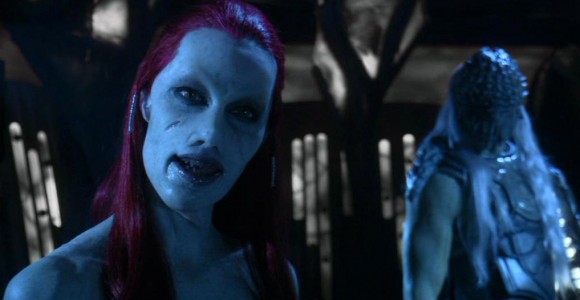 The Wraith have begun an assault on Athos. Darts pour out from the Stargate and begin systematically culling portions of the Athosian-occupied landscape. Colonel Sumner, Sergeant Bates and the small battalion of Earth men are ill equipped to handle the bombardment. It is only when Major Sheppard contacts Sumner and informs him that the Wraith are able to make humans see things that aren't there does he point his guns to the sky.

Sergent Bates manages to disable a single Dart before he and Sumner are swept away in a culling beam, along with Halling and a number of other Athosians. Teyla is lost in this manner as well. Sheppard radios Ford, still on guard at the gate, to memorize the coordinates to where the Wraith are returning.

Back in the city, power readings are going critical. Dr. McKay has lost all patience for the drain. It is time to leave – before the city is destroyed by the ocean. But just as Dr. Weir orders the dialing sequence to commence, an incoming wormhole blocks their escape. Ford's I.D.C. ushers in Sheppard, the remainder of his team, and the entire Athosian colony.

The clamp mechanism holding Atlantis to the ocean floor releases, and the city is allowed to rise – bursting through the surface of the water to a glistening morning sun. This unanticipated safeguard has preserved the city for the future.

Now that Atlantis is above water, Weir is hopeful that the shield will be useful if the city fell under attack. Unfortunately, there is only enough remaining energy in the Z.P.M. to power the most basic systems.

Sheppard turns over the coordinates the Wraith escaped to, ordering McKay to come up with the right combination. But Weir is not willing to let him attempt a rescue. She takes this matter up with him in private, explaining that the Wraith, once aware of the city's resurrection, would be impossible to stop. But Sheppard assures her that now that humans have been taken prisoner Atlantis will likely be revealed anyway. Reluctantly, Weir grants the mission.

Unfortunately the coordinates to the Wraith escape route end in space. But McKay introduces Sheppard to the ships found earlier. His Ancient gene activates the craft once he steps inside. Later, Sheppard is joined by Ford, Stackhouse and several military team members for the rescue mission. The ship, nicknamed a Puddle Jumper, remotely activates the Stargate and flies through.

One Athosian has already been taken by the Wraith. Now Teyla, Bates, Halling, and several others are forced to watch as an intimidating Wraith commander and two guards take Colonel Sumner away from the cell.

Sheppard lands the Puddle Jumper several clicks from the Wraith compound. He teams himself up with Ford and enters. Soon they locate the prison cell, and give Bates the equipment necessary to escape from within, while Sheppard goes in search of Sumner. Meanwhile, the Wraith Keeper's powerful mind tricks have forced the colonel to reveal that there are more than millions of humans from his home planet, but the woman isn't able to learn Earth's location. All she knows is it is not in her galaxy. But in any case, the amount of food available "out there" is enough to satiate her people for some time to come.

When Sumner refuses to relinquish more information the Keeper begins to feed on him – placing the feeding tubule of her hand onto his chest – draining his life force. Sheppard, who has concealed himself a floor above, shoots at her and her minions, but soon it is too late. Sumner is little more than a corpse. He nods at Sheppard, giving approval to end his torment. Sheppard fires his P-90 at the Colonel, killing him.

But Sheppard himself has now become a captured by the Wraith. The Keeper questions him as to where he obtained the Ancient technology he possesses, but to no avail. Before she can now feed on the major, Lieutenant Ford comes to the rescue. Sheppard orders the C-4 they planted to detonate, making several big holes in the compound. Sheppard takes the long, thin end of the Wraith rifle and drives it through the Keeper. She falls to the floor. "You don't know what you have done," she tells him, assuring him that she, the safeguard for her entire race, will ensure that all Wraith in the galaxy will now awaken.

Sheppard and his party hurry with the captives back to the Jumper. The ships enters orbit of the planet, only to find their way blocked by a squadron of 13 Darts. Sheppard is forced to de-cloak the Jumper to drive them away, releasing powerful drone weapons he had no idea the ship possessed into the Darts of the enemy. As the Stargate opens to Atlantis Ford inputs his I.D.C., but on final approach several Dart blasts penetrate the Atlantis gate room. Sheppard retracts the drive pods just in time before the ship goes through, activating the shield behind them when they emerge on the other side.

A celebration for the rescue has commenced on a lower terrace of Atlantis's central spire, where Weir congratulates Sheppard and Ford with cups of General O'Neill's wine – and a push to Sheppard that he must now compose a team. It is Weir's opinion that the new occupants of Atlantis must do their part. With the Wraith stirred, missions must commence to get help to the rest of the Pegasus Galaxy. And do what they came to do.