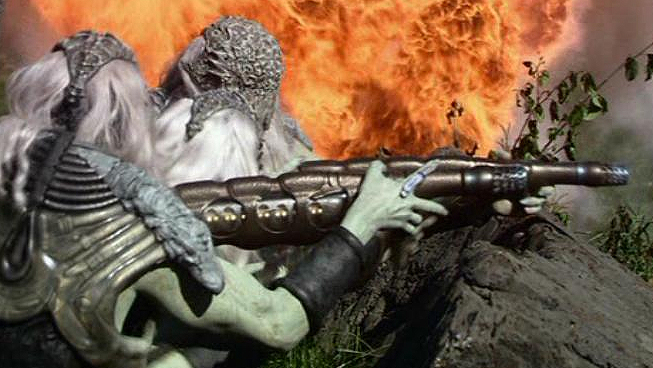 Two-handed weapon carried by Wraith warriors, which discharge an electrifying blue field of energy that paralyze its target. The rifle is illuminated by yellow cells on either side (perhaps to indicate power storage), and its tip is a long and sharp stem which can impale a victim.

Like many other Wraith weapons, the rifles are only designed to stun a victim, not kill him or otherwise damage the cells of his body. This allows the Wraith to hunt other beings in a culling and bring them back to a hive ship for the later draining of their life force.

Rising, Part 2 - Sheppard and his team are assaulted by Wraith stunners as they attempt to reach Colonel Sumner. Sheppard uses one of the weapons to impale and kill the Keeper.
Thirty Eight Minutes - The Wraith fire their weapons at the team's fleeing Puddle Jumper, damaging the ship's starboard drive pod.
Suspicion - Fleeing from the Wraith on another planet, Dr. McKay is shot in the face by a Wraith weapon. Sheppard uses one of the rifles to apprehend a Wraith.