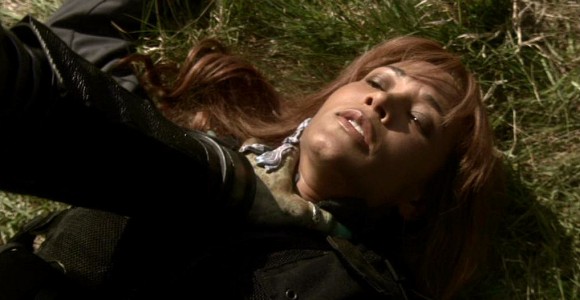 After a series of run-ins with the Wraith, the team begins to suspect their Athosian allies of having a spy in their midst.

The Atlantis base receives an intense radio transmission from Major Sheppard's team: they are fleeing from the Wraith back through the Stargate. Dr. Elizabeth Weir orders the shield protecting the gate to be lowered to allow the team safely through, and the Gate Room is riddled with energy blasts from Wraith weapons. The team comes through, but Dr. Rodney McKay is struck by one of the blasts before the shield can be raised again.

In the infirmary, Dr. Carson Beckett tells McKay that he's going to be alright. The Wraith energy weapons are designed to immobilize their pray, not to kill targets. McKay will suffer some paralyses and is unable to talk, but the effects will wear off. Meanwhile, Weir confronts Sheppard with a suggestion that is now inescapable: His team has met the Wraith on five of their last nine missions. It's clear that they have a spy in their midst.

Sergeant Bates, once Colonel Sumner's right-hand man who has now been placed in charge of base security, joins the team in discussing the situation. Sheppard is put off by the fact that Teyla, his team's new Athosian member, was not invited to the briefing – as is she, when she finds out about it. But Bates and Weir insist that no Athosian, even Teyla, is above suspicion. Sheppard is frustrated as Weir and bates begin to conduct interviews with the Athosians.

Halling and the rest of the displaced tribe are offended by the accusatory nature of the questioning. They have lived in fear of the Wraith for generations, and there is no one among them who has not lost a loved one to the evil enemy. Halling himself has only tried to help their new allies from Earth, joining Sergeant Stackhouse's team and introducing them to some of the Athosians' trading partners. Despite Weir's attempts to diffuse the situation, the Athosians come to the conclusion that they are no longer welcome in Atlantis.

In the Puddle Jumper bay, Drs. McKay and Zelenka continue to study the Ancient ships. They accidentally trigger a command they haven't seen before in the ship's systems, and marvel as the ceiling of the massive bay retracts. Excited by the prospect of exploring the planet they now call home, Sheppard and Lieutenant Ford take a Puddle Jumper up. They make a quick discovery: there is a massive continent only 25 minutes away.

At Bates' suggestion, and over Sheppard's objection, Weir must consider the possibility of relocating the Athosians out of the city and to the land mass. She is somewhat surprised when Halling approaches her with the same idea, eager for his people to till the soil and make a life for themselves once again. Weir suggests that if they relocate the Athosians and the Wraith attacks stop, it will only prove that they have a spy in their midst. Halling suggests in turn that when the attacks continue, it will only prove their innocence. Weir agrees that it is the best solution for all parties, and the Athosians prepare to leave.

Teyla, however, comes to the difficult decisions to remain a part of the Atlantis team. She has never before been separated from her people, but Halling reassures her that it is the right decision. Visits will still be common, and Dr. Weir has arranged for communication with the new village.

With the Athosians safely relocated, Major Sheppard takes his team to explore a new planet. There they find ancient ruins marked with a language that is difficult to translate; the job would go much more quickly if they had help from the locals. Teyla warns John that they are a very shy people, who most likely went into hiding as soon as they came through the gate. He tells her to go and find them, sending Ford with her. But a little way off, Teyla tells Ford that his presence is likely keeping the natives from coming out of hiding. He agrees to let her carry on alone.

Shots ring out, and the team takes cover in the ruins as a group of Wraith emerge from the forest! Their position has been given away again. They retreat toward the gate, barely escaping the attack and asking for immediate permission to return to rescue Teyla and Ford. Weir refuses, and Sergeant Bates speculates that Teyla is certainly the traitor. When she radios that she is coming through with an unconscious Ford, Weir is uncertain about whether to continue trusting her. If she lowers the Stargate shield, a squad of Wraith could come through.

Weir lowers the shield, and Teyla drags Ford through. She is immediately surrounded and taken into custody by Bates, despite Sheppard's insistence that she has nothing to do with the constant Wraith attacks. Bates orders her possessions searched and examined by Dr. McKay – who makes the discovery that explains their recent run of bad luck. Teyla's necklace, which Sheppard himself found in a cave on Athos and gave to her, contains a Wraith transmitter. His advanced genes had activated it when he touched it; Teyla had been giving them away, but without knowing it. McKay speculates that the Wraith must have devised technology that detected the Ancients when the two species were at war long ago, and Sheppard's Ancient-like DNA activated it.

Teyla is free from suspicion, and the necklace gives Sheppard an idea: they will use it to draw the Wraith and set a trap for them, in an attempt to capture one. Two teams set the trap on another planet, armed with stun guns to shock a Wraith into submission. When a team of four Wraith are drawn there, they find their target – but the soldier activates a self-destruct mechanism on his armor and explodes. Meanwhile, Teyla has chased down their leader and engaged him in combat, only to be defeated and pinned to the ground. Sheppard arrives before the creature can begin feeding upon her, shooting the Wraith with one of their own stunner weapons.

Back at Atlantis, the Wraith is put into a cell protected by an Ancient-created shield. Major Sheppard speaks with him briefly, and is unimpressed with the Wraith's threats: by capturing him and holding him there, the humans have only hastened their impending doom.