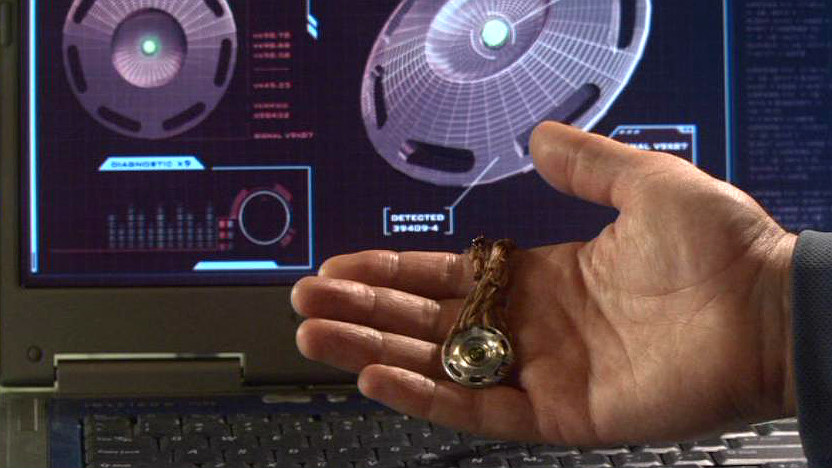 Device used by the Wraith to deliver alert signals to hive ships over subspace, as well as to surreptitiously keep track of targeted prey set loose in the Pegasus Galaxy. The transmitter is small in size and comes in many forms, including a small pendant or an implant inside the body. Wraith soldiers also wear bracelets equipped with the beacons. The device transmits information about the location of the target to relay devices, which then transmit the intelligence to a nearby Wraith ship.

The pendant versions have been easily mistaken for other things, such as simple jewelry. Tagan gave his daughter Teyla Emmagan such a gift, but when she was a child she lost it in the old caves of Athos where she was playing. Major John Sheppard later found the device. By simply touching it he set it off, quietly sending a signal to the Wraith, inviting an approach.

The Wraith use implanted transmitters to keep up with Runners, prey who are set loose and then hunted from planet to planet.

Rising, Part 1 - Sheppard finds Teyla's old necklace and returns the property to her, not realizing he is likely responsible for the attack the Athosians are about to receive.
Suspicion - After falling under attack in five out of nine missions Sergeant Bates orders Dr. McKay to search Teyla's belongings, and finds the Wraith transmitter concealed in the form of her necklace.
Childhood's End - Sheppard finds a Wraith bracelet with an active transmitter in a memorial on M7G-677.
Runner - Dr. Beckett removes a transmitter embedded in Ronon Dex's back.
Sateda - When the Wraith recapture Ronon and set him loose on his ruined homeworld, they first implant a new transmitter into his back.
Tracker - After she is kidnapped by a Runner, Dr. Keller uses a portable defibrillator to shock Kiryk and deactivate his tracking implant.