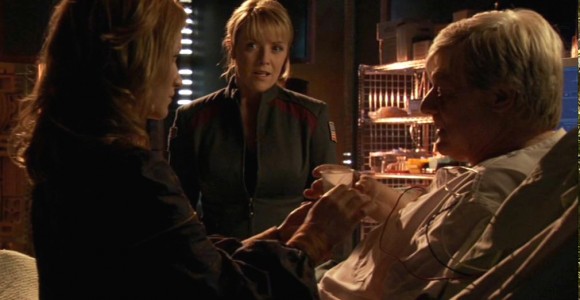 The team meets a man with extraordinary prophetic abilities, who gives them a dark prediction about Atlantis's future. Meanwhile, the Wraith seek a new alliance with Atlantis in their war with the Replicators.

The city of Atlantis is visited by a man with extraordinary prophetic abilities, and who apparently has the ability to share these shocking visions with others. The gentle man is named Davos, and he is accompanied by a woman named Linara.

But Davos is quite ill. He believes that he is dying, but before he passes on he will share what he knows with those who now live in Atlantis, the city of the Ancestors. There are Wraith hive ships coming.

When Teyla goes to speak with Davos, he already knows that she came to his planet seeking to learn the fate of her people, the Athosians. It is not clear where they have gone or what has happened to them, but Davos can assure Teyla that they are alive – though they are "shrouded in darkness."

And Davos knows more than this. He also knows that Teyla is pregnant. She is stunned that he knows, and confesses that she has not told anyone on Atlantis yet.