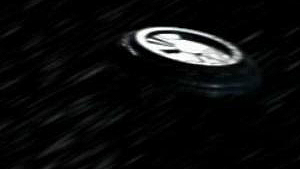 Flat and circular in design, Anubis's escape pod is capable of launching from his mothership even as the vessel is breaking apart, and has the ability to travel through hyperspace by itself -- the smallest Goa'uld vessel known to have that capability. When Anubis used it to escape from the atmosphere of Langara, the small vessel was able to evade the sensors of several imposing Goa'uld Ha'taks before escaping into hyperspace.

This craft disconnects from the central framework of the mothership, where Anubis's super-weapon launches its blast of energy. It is unclear if the escape pod also contains the technology, as well as the Eyes that powered the weapon.

Homecoming - As Baal's forces barrel down on Anubis's vessel, Anubis manages to escape to hyperspace in his escape pod. His mothership is obliterated.