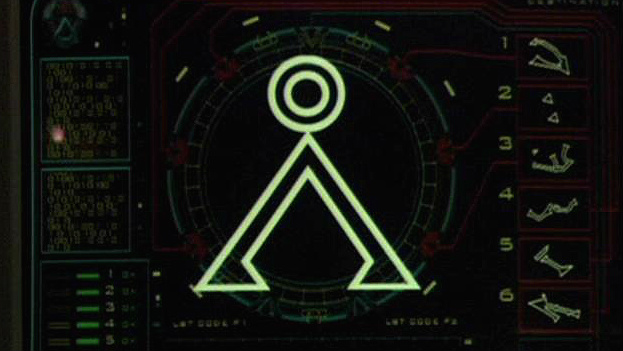 Term given to the final symbol on a Stargate address (the shape of which is often denoted by a characteristic of the planet in question). Without a point of origin, Stargate coordinates are incomplete and therefore useless. The symbol is often unique to the planet, and so may not appear on Stargates elsewhere in the galaxy.

"Stargate" the Movie - Daniel Jackson deduces the point of origin of Earth is a pyramid with the sun directly above it. Later he discovers Abydos's point of origin, a pyramid with three moons in a triangular orbit.
Solitudes - Carter locates the original Stargate in Antarctica and discovers the point of origin to be represented by a flat landscape with a sun rising.
The Gamekeeper - Daniel Jackson pushes the seventh symbol on the Resident world which appears to be the symbol of the Keeper.
Air, Part 1 - Dr. Rush is unable to dial the 9-chevron address to the Destiny from the Icarus planet, until Eli Wallace points out that the point of origin should be that of Earth instead.