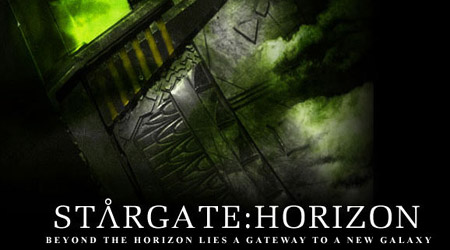 GateWorld is pleased to introduce readers to Stargate: Horizon, and welcome the project to the new GateWorld Network! It’s a unique story-telling project that we hope fans of all types will check out.

Stargate: Horizon is a virtual spin-off to Stargate SG-1. Set seven years into the future, the series is conceived and written just like a television show. One episode is published every week at the same hour, with 22 episodes in each year-long season. All episodes are written just like one-hour television episodes, in the standard industry format for teleplays. (However, the writing team does include more details into the scripts than a screenwriter normally would, in order to make them interesting to read even for people who don’t normally read scripts.)

The goal of the Horizon project is to give everyone reading the episodes the feeling that they are watching them on television. Readers are encouraged to approach it just like a television show, and judge and rate the episodes just like television episodes. Everything from the outline to the writing and rewriting of the scripts, and the way the 5-person writing staff works together, is just the same as on a television show. We’ve even kicked off the new official Stargate: Horizon discussion board at GateWorld Forum!

Set in a previously unexplored galaxy, Horizon tells the story of a group of explorers and scientists from Earth, who man Horizon, an alien deep-space station. As the series began, a new team of explorers discovered a completely new and to date unknown Stargate network, and one of these gates is located on this station. The station was built by a race of humans called the Vorians — very much like humans, but technologically more evolved.

Unlike any Stargates previously discovered by the S.G.C., this gate network spans two galaxies, including several remote planets in our own.

The first 22 episodes wrapped in May with the Season One finale, “Judgment Day.” Season Two will make its debut on Thursday, September 22. So when the televised Stargate series begin their fall reruns, get your fix with Stargate: Horizon!

Visit the official site at StargateHorizon.com to learn more about the virtual series, and to dive into Season One! The site also features character sketches, the show’s original theme music, podcast audio commentaries for key episodes, and desktop wallpaper. We’ll continue to report on the project’s development here at GateWorld.

Horizon is the first addition to the GateWorld Network, a group of carefully-selected Web sites that have chosen to join up as GateWorld partners. These sites will expand on the breadth and depth of content you can find through GateWorld, while maintaining their creators’ independence.

We hope to add additional sites in the months to come. In the meantime, stay tuned to GateWorld for the latest updates on the Stargate: Horizon project!