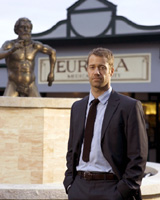 The SCI FI Channel has greenlit production on Eureka, adding the new show to its schedule for a summer 2006 premiere, the network announced today. The cable network has ordered 13 original hours, including the previously produced but still unaired two-hour pilot.

Nestled in the Pacific Northwest, Eureka is a seemingly ordinary town whose residents lead ordinary lives … at least to the naked eye. Shrouded in secrecy, the picturesque hamlet is actually a community of scientific geniuses assembled by the government to conduct top-secret research. What they’ve unwittingly created is a place where anything imaginable can happen … and does.

While transporting a teenage runaway, Federal Marshall Jack Carter (Colin Ferguson) wrecks his car in the town of Eureka. Stranded, Carter quickly discovers Eureka is not all it appears when a child vanishes in the catastrophic aftermath of an accident caused by a creation of one of the town’s eccentric residents. Instinctively, he inserts himself into the investigation working alongside the town’s sheriff (Maury Chaykin) and an agent from the Department of Defense (Salli Richardson-Whitfield). As the case unfolds, Carter is let in on one of the country’s best-kept government secrets: Eureka is a haven created for the worlds greatest minds to live, work and create. But, unknown to most, mystery, conspiracy and long simmering secrets lurk just beneath the surface of this seemingly idyllic town.

“Eureka is a smart, fun series which furthers our desire to create accessible and entertaining original programming on SCI FI,” Mark Stern, SCI FI’s Executive Vice President of Original Programming, said. “This series is set in present day, on Earth and involves characters and storylines that are relatable and intriguing with an imaginative sci-fi twist.”