What is Stargate: Horizon all about? Who are the main characters, and what is the premise of the fan-written virtual series? And who are the villains?

This Stargate: Horizon primer will introduce you to the universe of the show, and it will give you an idea of what some of the major plot lines in Season One were about, and what to expect for Season Two. This first installment focuses on the basic setting of the show, as well as one of the major villains of Season One. The second part will give you an idea of the other major villain (yes, there’s more than one!), as well as introduce you to one of the most important parts of all shows: the main characters.

Stargate: Horizon is set seven years after the current television seasons of SG-1 and Atlantis. One of the liberties we have taken is to establish that the Stargate program has gone public some time between now and 2011. So when Horizon premieres the Stargate has been public for a relatively short time. The S.G.C. has now become the I.S.G.C. (International Stargate Command). It contains military officers as well as civilians from all over the world, and it carries on the feeling of internationality that was started on Atlantis.

Naturally there are also a lot of political ramifications that came out of the revelation of the Stargate program. To get an idea of what those are, and where this all might be going in Season Two, I recommend to check out the Season One episode “Home Front.”

Now let’s take a moment and go back in time. To be precise, let’s go back 10 months to when things first started: November 4, 2004. As Stargate: Horizon premiered, a team of explorers went on a mission to investigate a mysterious alien attack on the Antarctic base (the same location we’ve seen on SG-1 and Atlantis). The aliens behind this attack, called the Draque (sounds like “Drake”), turned out to be part of something called the Ascendant Empire, a once powerful formation of species in the distant Triangulum Galaxy.

Without spoiling any major plotlines, we eventually learned that the Ascendant Empire was an enemy of the Ancients, presumably since the time the Ancients first started to expand into the Triangulum Galaxy. There was an ongoing war which eventually the Ancients won. They defeated — or rather severely weakened — beings called the Sentinels. The Sentinels are a higher type of life form, which exist outside our normal space-time continuum, and they are the leaders of the Ascendant Empire.

So, the Ancients won their war against this empire. This was, of course, some time before the Wraith showed up, who in turn ended up defeating the Ancients.

While on the mission to find the Draque and learn what the intentions behind their attack are, our team discovered an abandoned alien space station. This station was built by a race of humans called the Vorians. Aboard this station the team was surprised to find a small group of Vorians, who had ended up being stranded there after their own encounter with the Draque. The surprise grew as a Stargate was revealed to be aboard the station.

This Stargate turned out to be part of a previously undiscovered network of gates. Unlike the already known gate networks, this newly discovered network spans two galaxies: the Triangulum Galaxy as well as some distant planets within the Milky Way Galaxy. As to why it wasn’t discovered earlier if parts of it are in the Milky Way, the answer is simple: this galaxy of ours is one huge place!

By the end of the pilot episode an alliance between Earth and the Vorians had been established, and the newly discovered space station became the first deep space outpost run by the I.S.G.C. The station, which has the Vorian designation “Entaris Twelve,” was renamed to Horizon, picking up on the purpose of the crew’s mission, which is to explore the unknown, to “see what’s beyond the horizon.”

In addition to the Stargate aboard Horizon, there is a second gate outside the station. This gate is much larger than common Stargates; it has an octagonal shape, and it was designed for ships up to fifteen decks in height to fit through it. The “Spacegate” is connected to the same network as the gate aboard Horizon; yet thus far this gate outside the station is the only of its kind discovered in the Milky Way Galaxy.

For learning more about just how these gates are able to connect to another galaxy this easily (they only use seven chevrons to do that), and what the eighth chevron on these gates is for, make sure to check out the early Season Two episode “Connection.”

Learn more and check out Season One at StargateHorizon.com! Our “Stargate: Horizon” Primer continues next week as we meet the characters of the series.

Alex Rubit is the creator of the fan-scripted series Stargate: Horizon. 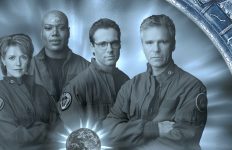