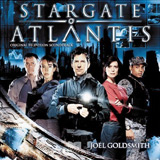 The Stargate Atlantis Season One soundtrack now has a cover image to go along with that November 15 U.S. release date. Amazon.com has published the new image, along with a list of the disc’s tracks:

The tracks indicate that the music will be limited to Joel Goldsmith’s score from the show’s 2-hour pilot movie, “Rising.”

Pre-order the disc today and support GateWorld with your purchase. The CD will arrive at stores on the same day as Atlantis‘s Season One DVD boxed set.

(Thanks to Mike Allen for the tip!)